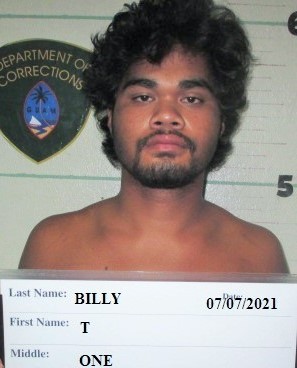 Police have arrested a man for robbing the same gas station multiple times in the same night.

The Guam Police Department responded to a retail theft report at the Shell gas station in Harmon.

When police spoke with Shell employees, they stated that 10 minutes prior, a male entered the gas station who was later identified as T. One Billy.

Billy took two cases of Heineken beer from the refrigerator and proceeded to run out of the store.

Hours later, leading into the following day at approximately 3:15 am, police returned to the same Shell gas station in response to another retail theft complaint.

A different employee informed police that 10 minutes prior, Billy entered the gas station again, attempted to take cases of Heineken beer from the refrigerator, and attempted to exit the store.

However, because employees recognized Billy from the earlier incident, they remotely locked the door blocking Billy’s escape.

Billy then kicked the glass door of the store and began to escape.

Police saw video surveillance footage confirming the account. The surveillance video showed that Billy entered the store earlier at 1:45 am and stole more cases of beer from Shell.

Police located Billy in VSA Benavente street in Dededo and he appeared to be highly intoxicated.

The magistrate’s complaint states that based on the evidence, there is probable cause to charge Billy with the following:

1 count of assault as a misdemeanor;

1 count of criminal mischief as a misdemeanor; and

3 counts of retail theft as a petty misdemeanor.