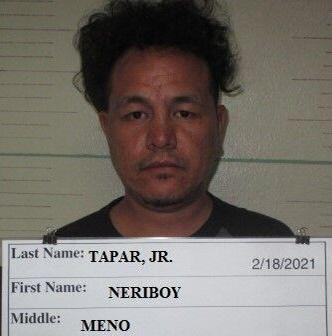 The Guam Police Department has arrested a 31-year-old man for harassment, stalking, and assault.

According to court documents on January 31, 2021, a call came into the Central Police Command around 5:30 p.m. through the emergency phone line and an unknown male who identified himself as Meri Tapar requested to speak with the victim. Tapar was asked the nature of the call and was told the victim wasn’t available.

Around 10:15 p.m. the same phone number called the precinct and the victim answered.

Tapar asked “Do you remember me?” The victim replied “No, I do not.” Then Tapar allegedly responded “If we meet up, go on a date, you’re gonna suck it,” court documents state.

Tapar used various names in his attempt to speak with the victim, which include Apple Bees, Neri Tapar, Merisoy Jr Meno Tapar, and Meri M Tapar, according to court documents.

Court documents state that during one call, Tapar claimed he knew the victim’s schedule and that knows that the victim is at the central precinct.

In another call, Tapar described various sexual activities he would like to perform with the victim.

The victim filed a stalking complaint against Tapar.

After a search warrant of Tapar’s phone number was conducted, police officers discovered that he made inappropriate calls beginning January 16 and that around 62 calls were made.

About 14 calls were also made to Guam Police Dispatcher through 911.

Police say that on February 18, a little after 6 am, their officers executed a “No Knock” Warrant.

Tapar allegedly yelled constantly as he actively resisted being escorted to and secured in a police vehicle.

According to court documents, Tapar admitted to making the phone calls to the CPC in hopes of coming into contact with the victim.