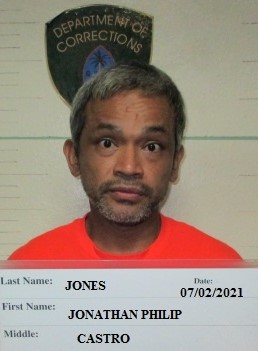 A man has been arrested for stalking and violating a restraining order.

Jonathan Philip Castro Jones was arrested on the following charges: advance stalking and two counts of violating a court order.

According to the magistrate’s complaint, on or about October 19 of last year, at around 11:24 pm, officers of the Guam Police Department met with a walk-in complainant who wished to file a complaint against her ex-boyfriend Jonathan Philip Castro Jones.

The victim reported that while she was out of her home, Jones called her at around 5:55 pm on that day allegedly demanding money and food and informed her that he was at her house.

Upon returning home, she noted that the back sliding door to her residence was ajar but Jones was not at her house upon her return.

The following day, on October 20, 2020, officers learned that Jones was back at the victim’s residence.

When GPD officers arrived on the scene, they met with the victim outside of her residence. She told the officers that Jones was in her bedroom.

Officers located Jones laying on the floor. When they spoke to the victim, she stated that she was afraid that he would continue to harm and continuously harass her.

On September 17, 2020, Judge Vernon Perez issued a restraining order, also called a protective order, prohibiting Jones from contacting and coming within 500 feet of the victim’s residence.

However, last week Thursday, at around 10 pm, while the victim was away from her residence, she was alerted by security cameras that an individual who she presumed to be Jones was at her residence.

Upon returning home, Jones was not found. However, a black bag was located outside the residence.

Officers discovered documents within the bag and identification cards that had Jones’s name on them.

Last week Friday, at around 1:48 am, GPD responded to a criminal trespass complaint at a residence in Dededo.

The victim reported that Jones had entered the garage and had left a bag of personal items, thus violating the protective order which is in effect until September 18 of next year.

The magistrate’s report states that Jones denied being at the victim’s residence but that he was under the influence of marijuana and that he knew the protective order would expire in 2022.