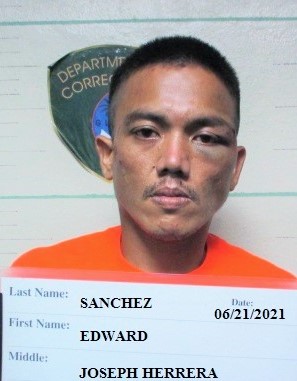 A man was arrested for the second time in less than a week for threatening violence.

On Sunday, Guam Police Department officers responded to a report of a male individual threatening a neighbor along Theodor Lane in Agat.

According to the magistrate’s report on the case, the suspect, who was later identified as Edward Sanchez, was threatening to kill his neighbor’s son.

But Sanchez stated that he did not threaten to kill anyone, and stated that an officer had killed someone instead.

Officers then transported Sanchez to Guam Behavioral Health and Wellness Center for treatment.

According to the magistrate’s report, upon exiting the vehicle at Behavioral Health, Sanchez refused to put on his shirt and began yelling at the officers.

The officers attempted to calm him down and informed him that he would be arrested for disorderly conduct if he continued.

Sanchez refused to comply and resisted arrest. The report stated that Sanchez kicked one of the officers and attempted to bite the other.

The report stated that there is probable cause to charge Sanchez with assault on a peace officer as a 3rd-degree felony, resisting arrest as a misdemeanor, and disorderly conduct as a petty misdemeanor.

Sanchez has had a history with the Department of Corrections, with this being the second time in a week that Sanchez was arrested.

Last Wednesday, Sanchez was taken into custody after threatening a female family member with a machete in Agat along with being in possession of methamphetamines.

Sanchez was charged with possession of a schedule II controlled substance as a 3rd-degree felony and family violence as a misdemeanor.

According to the DOC report, Sanchez had previously been charged with, but not limited to, assault, multiple counts of terrorizing, driving under the influence, and illegal possession of a controlled substance.