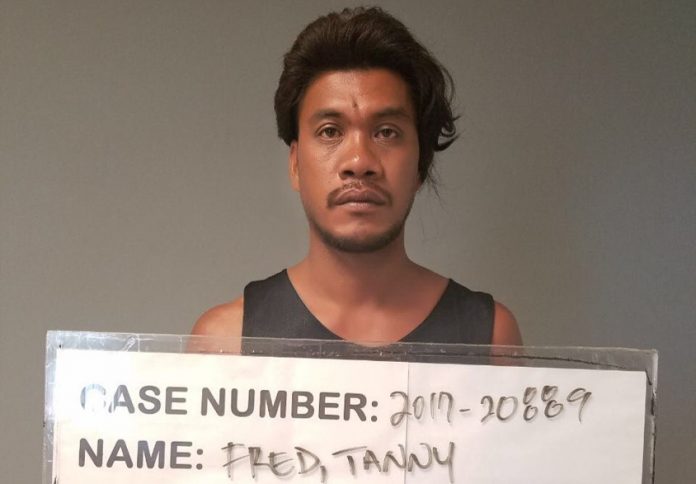 The victim provided a description of her attacker which police used as they canvassed the area before apprehending the suspect.

Guam – Police apprehended a man identified as Tanny Fred for robbing a woman at the I&E apartments in Mangilao.

According to Guam Police Department Spokesperson Officer AJ Balajadia, the victim reported to police on Thursday that as she was attempting to get into her vehicle in the parking lot of her apartment complex, a male individual approached her from behind, held her at knife point with a kitchen knife, demanded money and threatened to kill her.

The startled victim held on her horn alarming other tenants as well as the suspect, Balajadia said. Fred then allegedly slammed the victims head on the steering wheel before fleeing on foot without any money.

The victim was able to provide a description of Fred which Hagatna Police Officers and Criminal Investigation Division detectives utilized as they canvassed the area for the suspect. They located Fred less than half a mile away from the scene. Balajadia says the victim positively identified the suspect.

Fred was charged with robbery, terrorizing, assault and possession of a deadly weapon in the commission of a felony.  He was booked and confined.