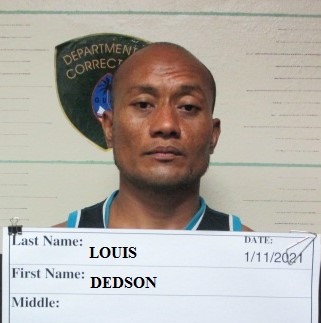 A man who has repeatedly assaulted a woman known to him has landed back in jail with another family violence charge.

Dedson Louis has a history of violence against the victim. According to court documents, Louis has assaulted the woman at least two other times resulting in misdemeanor charges of family violence.

On January 11, police were called to the victim’s Dededo residence, noting that the victim was distraught and breathing heavily.

The victim told police that Louis “is crazy and for unknown reason got upset with her and threw rocks at her residence.”

The victim recalled going outside to confront Louis who was armed with a shovel and a knife. She stated that Louis was cussing, and threw several rocks at her, but missed, hitting the residence instead.

Police reported that the victim is fearful and believes Louis will kill her.

It was noted that Louis has been arrested in the past for similar crimes and the victim asked police why nothing is being done.

Louis was ordered by the court to stay away from the victim. However, according to the victim, when Louis was last arrested, he stayed away for a bit but came back two weeks ago unannounced and stayed at the residence.

Police indicated that Louis was not present at the residence when they responded to the complaint.

It wasn’t until he later returned that police were able to apprehend and arrest him.

Louis was arrested on an active bench warrant for an existing pre-trial family violence case.

He was also arrested and charged with one count of family violence as a third-degree felony.

This is Louis’ third family violence offense. He was booked and confined.