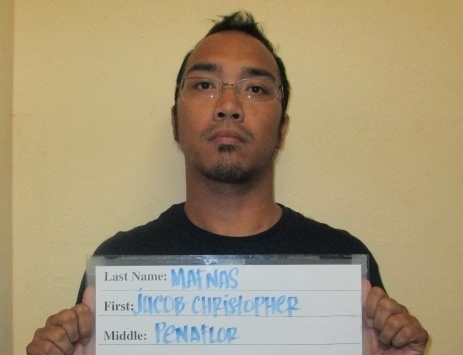 The Attorney General’s Office says Mafnas was never booked and confined as the Guam Police Department had stated.

Guam – The man who was arrested three days ago for posting a cryptic message on Facebook about Chad DeSoto was booked and released.

Jacob Christopher Penaflor Mafnas,34, was arrested Monday night after police say he posted a Facebook status saying “Someone take my keys away from me because I feel like pulling a Chad DeSoto.”

DeSoto is infamously known for the February 2013 Tumon Tragedy in which he drove his car through a crowded sidewalk, jumped out and began stabbing people at random. Three people died in the attack and 11 others were injured.

Attorney General Spokesperson Carlina Charfauros says Mafnas was never booked and confined, he was processed at the Hagatna precinct and released the same day but was given a notice to appear in court within three years.

Charfauros says although the AG’s Office will not be pursuing charges against Mafnas at this point, they may still consider it in the future and will have up to three years to do so.