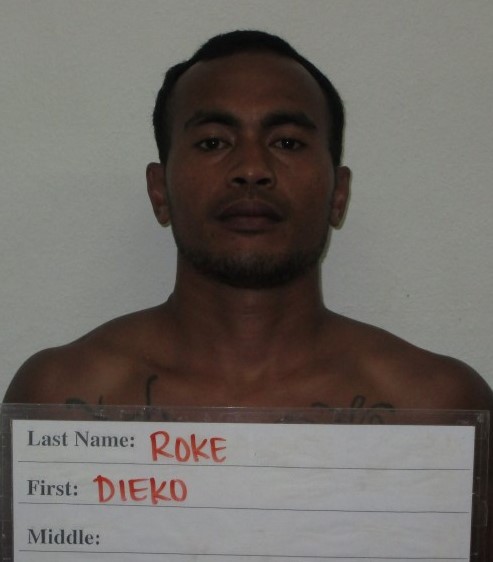 Guam – Driving under the Influence, and eluding police officers was just the beginning of charges brought against 29-year-old Dieko Roke.

According to Court documents, on July 20, a GPD Officer witnessed Dieko Roke revving his engine at the four-way stop next to the Hagatna Precinct. When the officer instructed him to pull over Roke instead proceeded to motor away. Leading officers on a chase through Hagatna, in one instance, almost rear ended another vehicle and then nearly caused a collision with an oncoming vehicle. Roke then pulled into a private driveway before exiting the vehicle and running to the back of the house before officers apprehended him. A passenger in the vehicle, stated to police that they both had been drinking. Then after being processed from the Hagatna Detention Facility and in preparation to be transported to DOC, Dieko Roke managed to pull away from the officer and run towards Plaza De Espana. He was later apprehended behind a dumpster in the parking garage of Academy of our lady of Guam High School. Roke also allegedly attempted to bribe the GPD officer, offering $300.00 in exchange for his release. He was charged with Bribery, DUI, Reckless Driving, Eluding a police officer, driving without a license, and Escape.