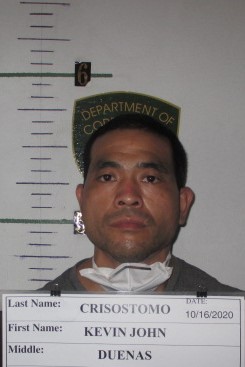 An officer’s keen eye helped recover a stolen motorcycle and put a man behind bars for theft.

Kevin John Duenas Crisostomo has been charged in the Superior Court of Guam for theft by receiving as a second-degree felony.

Crisostomo denies knowledge of the motorcycle being stolen and claims he bought it from a friend, court documents stated.

Police found wet paint on his jacket matching the paint job on the bike. According to police, the patrol officer was able to wipe off some of the paint from the motorcycle as it were still drying.

Police pulled over Crisostomo for not having a license plate, and after running the vehicle’s identification number, discovered that the motorcycle was reported stolen on January 14, 2019.

Crisostomo has been implicated in crimes similar in nature.

Assistant Attorney General Joseph Brendlynno noted that Crisostomo was indicted for burglary in 2018, followed by burglary to a vehicle and theft by receiving a motor vehicle in 2019.