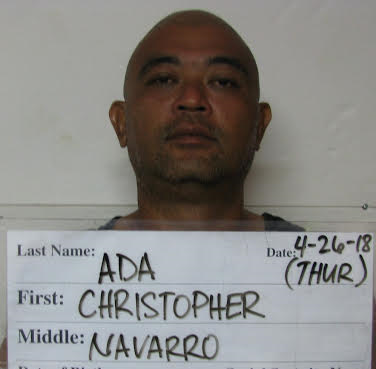 Guam – Another drug arrest has been made this time involving an Agana Heights man allegedly dealing cocaine from his vehicle.

Acting on a tip, police say they were able to track down a suspected cocaine dealer. Information from a source described the dealer’s vehicle and whereabouts allowing officers to locate the vehicle and its driver in the parking lot of Toto Market.

The driver was identified as 39-year old Christopher Navarro Ada.

According to GPD Spokesperson Sgt. Paul Tapao, officers discovered over 13 grams of cocaine inside the vehicle.

This marks the fifth cocaine related arrest since the initial discovery of 4 pounds of cocaine which washed ashore in Mangilao on March 17th.

One month later another kilo of cocaine was discovered on the northern shores of Sirena beach in Anderson Air force base.

Local and federal authorities continue to investigate these discoveries as well as monitor the recent arrests.

Meanwhile Ada, was arrested for Possession of a Scheduled two controlled substance and Possession with the Intent to Distribute.