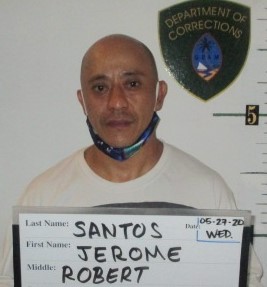 Police have arrested a man on allegations that he attempted to cash a bogus Economic Stimulus check but authorities  are still searching for another suspect involved in the COVID scam.

Two men walked into Valencia Foreign Exchange on Wednesday with stimulus checks in hand but when the clerks inspected the checks it was discovered that they were fake.

Police say that Jerome Robert Santos and Gerald Belga were the recipients of the illegitimate checks but following the incident were only able to locate Santos.

“The clerks attempted to stall the two and were able to take photocopies of the checks and their photo ID’s. However, the Defendant and Belga became upset and insisted on the return of the checks. The clerks mistakenly gave the defendant check to Belga, but Belga’s check was retained by Valencia,” stated court documents.

Police arrested Santos when he returned to Valencia for a second time attempting to cash the bogus check.

Santos told police that Belga gave him the check.

Further stating that the checks were printed at Belga’s home.

Police are searching for Belga while Santos has been charged with Forgery.