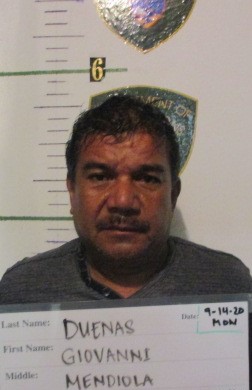 A 14-year-old girl and her father met with Guam police, detailing what the girl says is years of being touched inappropriately.

On Saturday September 12, the female minor explained that a male known to her, Giovanni Mendiola Duenas, would touch her inappropriately from the ages of 4-9. She told police that in the first incident, Duenas asked her if she wanted to see his “chili,” or penis. Duenas would then pull down his shorts and allegedly make her touch his privates.

The minor told police that Duenas would touch her private parts on a weekly basis.

She told GPD officers that Duenas, “would put his hands under her pajamas and touch her private part over her panty.”

The female minor says she told her mother about the incidents when she was 9-years-old. The mother confronted Duenas, who allegedly admitted that he had in fact touched her daughter. Authorities were not notified until last Saturday, five years later.

Giovanni Duenas, 56, has been charged with Second Degree Criminal Sexual Conduct (as a First Degree Felony).