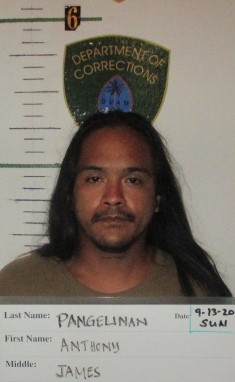 Guam Police arrested and charged a 33-year-old man for allegedly firing a gun he did not legally own.

According to police, on Sunday September 13, Anthony James Pangelinan was with his mother and another male at their Agana Heights residence. Pangelinan had apparently become upset with his mother because she would not give him money for cigarettes.

Police say Pangelinan then left his house screaming profanities, and that’s when his mother and the other male heard a single gunshot outside.

His mom indicated that she was in fear for her life.

When police were called around 1:30pm, they arrested Pangelinan in one of the home’s bedrooms.

Inside the bedroom, police discovered a pellet gun, a “Marlin” 22-caliber rifle, and a Sig Sauer pistol. According to police, both the Marlin rifle and the Sig Sauer 380 caliber pistol were loaded with bullets.

Police ran a check of the Sig Sauer pistol and found that it had been reported stolen on April 27, 2018 from the Umatac residence. Police were not able to do a background check of the Marlin rifle because the serial number had been obliterated.

Officers interviewed Pangelinan, who admitted that he knew that he was not supposed to be in possession of the firearms because of his previous convictions, including one of a Family Misdemeanor.

The defendant further admitted to discharging the rifle in the jungle behind his house because he was angry with his mother.

Pangelinan was charged with two counts of Possession of a Firearm without a Firearms ID and Theft by Receiving (as a Third Degree Felony).