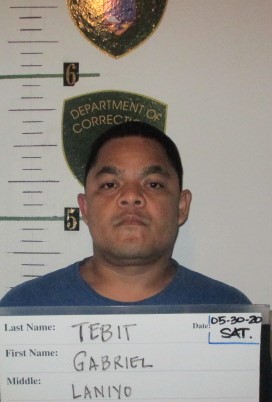 Guam Police have charged a 36-year-old man after he allegedly threatened his wife with a machete.

Police say around 3pm Saturday, they responded to a disturbance in Yona and had to meet with the victim at the Yona Mayor’s Office.

The victim told police that earlier that day, she and her husband, Gabriel Laniyo Tebit, were arguing when he grabbed a machete and raised his arm with the weapon towards her.

She said he got irritated that she had raised her voice at him, as he’s apparently hard of hearing. The victim says, the defendant left the house in the middle of the argument and came back with a machete.

She believed he was raising his arm to attack her with the large knife.

It’s not clear what the argument was over, however the victim says she feared for her life and the safety of the children, who were in the home at the time.

She took put her children in the car to head straight for the Mayor’s Office to seek refuge.

Police questioned one of the children, a 15-year-old, who witnessed the incident. The minor corroborated the victim’s account of what happened and added that the grandmother yelled at Tebit, the defendant, to stop. When asked if the teenager believed the defendant would actually harm their mother, the teenager said, “yes, I think so,” according to Guam Police.

Tebit has since admitted to arguing with the victim and being in possession of a machete during the incident.

Grabiel Laniyo Tibet has been charged with Aggravated Assault and Family Violence.