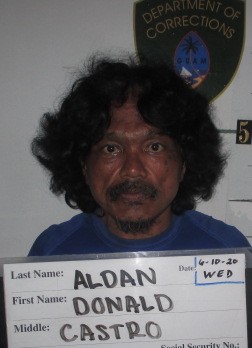 A 51-year-old man has been arrested and charged after hitting a Guam police officer and then allegedly trying to fight him with a sharpened piece of metal.

According to the Guam Police Department, the incident began on Wednesday around 1:30 pm when police stopped a 2017 Nissan Versa.

Police asked the driver if they could search the vehicle and found Donald Castro Aldan, the defendant, sitting in the back of the car.

Police asked Aldan to get out of the car so they could pat him down for weapons and noticed him holding onto a glass pipe in his hand. Police say the pipe had a bulbous end with brown residue that was suspected to be meth.

The defendant then allegedly tried to throw the pipe when police noticed it.

That’s when officers told Aldan he’s under arrest and proceeded to place him in handcuffs. Aldan then reportedly elbowed the arresting officer and tried to flee the scene. The officer and the defendant started a struggle, which led to them both falling to the ground.

The man was eventually arrested.

Police say when they took Aldan into the interview room at their Dededo Precinct, matters got worse.

An officer came into the room to begin the interview and found Aldan holding a sharpened aluminum vent flap, ready to fight the officer.

The officer was able to take the sharp metal away from the defendant and forced him to the ground.

When asked why he wanted to fight the officer, Aldan told police that, “he did not like jail.”

Police say the vent flap was taken from an actual vent in the interview room, which was damaged.

Aldan has been charged with assault against a peace officer, possession of a controlled substance, resisting arrest, and criminal mischief.