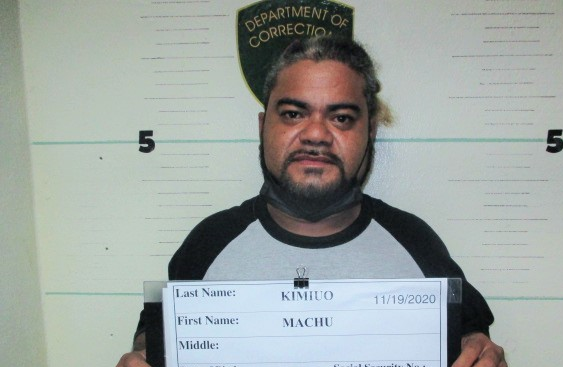 Guam Police arrested a man, after he allegedly hit his wife with a machete after the two got into an argument.

Machu Kimiuo was drunk and arguing with his wife when he went into their home, retrieved a machete, and told her “I will chop you,” according to court documents.

The report states that Kimiuo threw the machete at the victim as she attempted to hide behind a tree. The machete struck her right leg.

Kimiuo reportedly left the Yigo residence with two of their children before police arrived.

When asked by the officer if the defendant was capable of returning to harm her, she responded, “yes, he’s crazy when he’s drunk.”

Police also interviewed one of the children who said that Kimiuo held the machete over his head and threw it striking the victim’s knee.

A day later, police were called to a Toto residence and a witness reported that the same victim was beaten with a cellphone.

Responding officers noted a laceration over the victim’s eyebrow caused by being struck twice with her cellphone.