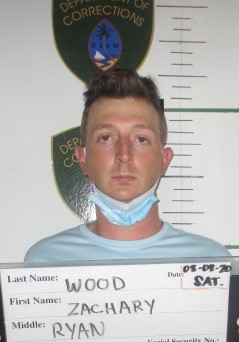 Details regarding the arrest of Zachary Wood were disclosed in court documents this afternoon as a criminal sexual conduct complaint was made formally charging the defendant.

Authorities discovered that Zachary Wood had knowingly engaged in a sexual relationship with a 13-year-old female he met on social media.

Police were contacted after the minor was reported missing from her residence at around 6 am in the morning on August 7. Nearly an hour into the search, Wood dropped the minor back to her home.

The minor told police that she met Wood over social media and that he had told her his name was Jonathan.

Police uncovered his true identity, further discovering that days prior to the search for the girl, the two had met up. The minor told police that he took her to his home in Agana where they had sexual intercourse, despite the minor telling Wood that she was only 14.

Wood has been charged with three counts of first-degree criminal sexual conduct and two counts of second-degree custodial interference.