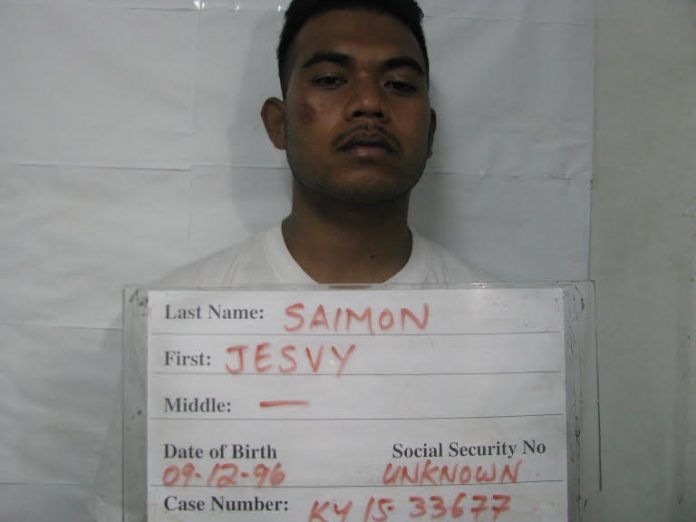 A 19-year-old man is accused of raping a 16-year-old girl in some bushes near the Micronesia Mall.

Guam – A 19-year-old man is behind bars after he allegedly raped an unconscious minor in the bushes near the Micronesia Mall.

Jesvy Saimon was charged with third degree criminal sexual conduct as a second degree felony and underage consumption as a misdemeanor.

According to a magistrate complaint, a passerby noticed something suspicious going on in the bushes by the side entrance to Macy’s at Micronesia Mall. The individual then flagged down a police officer who approached to area to find Saimon inside the bushes.

Police say Saimon then stepped out after he was instructed and stated, “I don’t know.”

But when the officer investigated further, he found an unconscious 16-year-old female lying on her back with her underwear down to her ankles, the report states.

The victim eventually came to and told the officer that she didn’t know who Saimon was but that she had just met him at the Micronesia Mall. “The victim only recalls talking and stated that she did not have sex with anyone,” the report states.

The officer who checked on the victim noted that she smelled of alcohol.

When interviewed, Saimon, according to police, admitted to consuming alcohol and having sex with the victim.