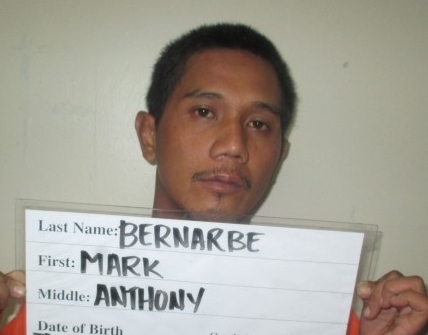 Mark Anthony Bernarbe allegedly tried to kill his girlfriend the night before his birthday.

Guam – A woman’s face was left severely beaten after her boyfriend allegedly beat up her up and tried to kill her when she tried to leave him, according to Guam police.

Bernarbe was charged in Superior Court with attempted murder as a first degree felony with a special allegation of possession and use of a deadly weapon in the commission of a felony, aggravated assault and family violence.

The report states that when Bernarbe’s girlfriend announced that she wanted to leave him, Bernarbe became angry, grabbed a knife and tried to stab the victim. She was able to fight off the knife, but police say Bernarbe then began punching the victim in the face multiple times until a relative pulled him away.

The victim was taken to Guam Memorial Hospital for her injuries. Police say her eyes were both swollen and she had multiple cuts and bruises to her face and right hand.

When interviewed by police, Bernarbe admitted to everything and also told police that “he did not realize how severely he had beaten her up until after someone pulled him away.”