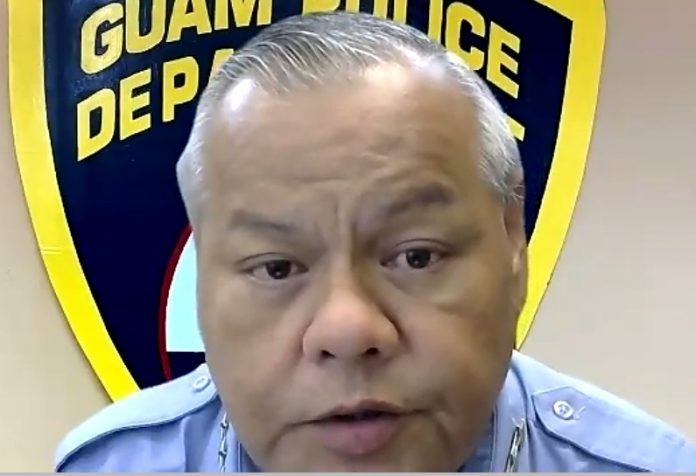 A man is dead, a woman injured and four Guam Police Department officers have been placed on administrative leave while authorities work to investigate what led to an officer-involved shooting which took place just before 10:30 Tuesday night.

Police were following up with an investigation into a theft complaint when officers noted a blue sedan with two occupants inside parked at an apartment complex on Bonito street in Tamuning.

According to GPD Chief Stephen Ignacio, police learned that the vehicle was stolen.

“As the officers approached the vehicle, the operator accelerated forward, striking a marked patrol car and another vehicle in the parking lot. Officers then engaged by discharging their firearms. The male operator and the female passenger were wounded,” Ignacio said in a news conference.

According to Ignacio, the woman was taken to Guam Memorial Hospital where she was treated for injuries. However, he does not know the extent of those injuries or her condition at this time.

The male operator has been identified as being possibly local. He was taken to the hospital for gunshot wounds but did not survive. Chief Ignacio also confirmed that during the incident, an officer was injured. The injuries sustained did not require medical attention.

At this time, Ignacio said it is too premature to conclude how many shots police fired but he did indicate that the four officers have been placed on administrative leave for 20 days and the department has 90 days to complete the administrative investigation.

“Let me just clarify that at this point of the investigation, we do not know if all four officers discharged their firearms. But we do know that four officers were present at the scene,” Chief Ignacio said.

To maintain the integrity of the investigation, GPD has enlisted the assistance of the Office of the Attorney General, Guam Customs and Quarantine, and the FBI.