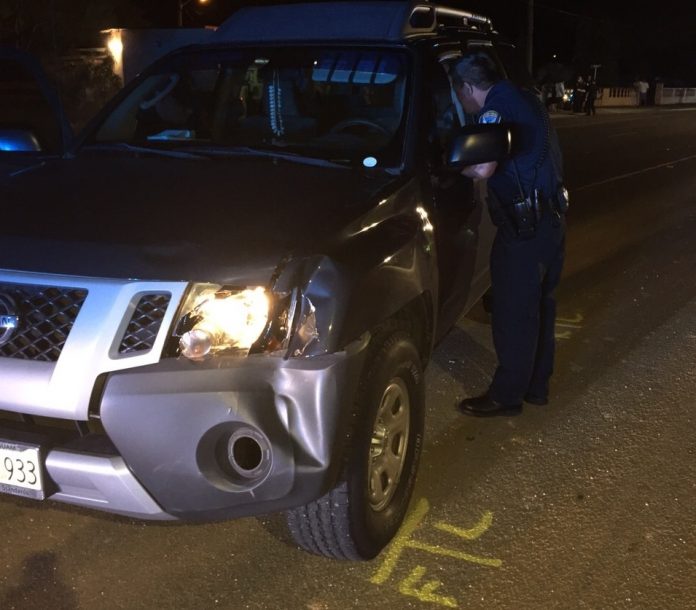 A man was killed on Route 10 last night by a driver police say was drunk. The pedestrian has been identified as 38 year old Songas Machusy of Mangilao. Police arrested 51 year old Richard Duenas Cruz of Mangilao for Vehicular Homicide while Intoxicated.

Guam roads are dangerous. It was just yesterday when we reported that a man was in critical condition at the hospital after being struck by a car in Tamuning. Not even a day after, we received another alert that a second auto pedestrian accident took place, this time in Mangilao and it claimed a man’s life.

A man was pronounced dead last night after he was struck with a SUV by a drunk driver in Mangilao.
Iomen Machy says the man that was hit was his youngest brother 38 year old Songas Machusy. He says, “He went to go to the store, he crossed the road and the car hit him.”
Machy tells us he and his brother live across the street and both work for the property owner across KNS Mart. He says he last saw his brother after work at about 7 last night. A few hours later…
He says, “Somebody told my landlord to see my brother. He got accident. We went out and the ambulance already took my brother to GMH.”
Police say at about 9:24 last night, Machusy was crossing Route 10 from KNS Mart when the driver 51 year old Richard Duenas Cruz, who was heading south, crashed into him. Guam Police Department Spokesman Officer AJ Balajadia says Machusy was unresponsive when he was being transported to the hospital. He was pronounced dead at GMH at 10:45 last night.
Machy reminisces about his brother. “My brother is very funny because sometimes if I need help, he can help me. I love my brother so much because he helped me find a job here.”
Police arrested Cruz for Vehicular Homicide while Intoxicated, DUI, DUI with Injuries, No Drivers License, Expired Registration and Mandatory Insurance. He was booked and confined.
Balajadia says Guam Highway Patrol is investigating the cause of the crash.
This is the third auto pedestrian incident in the past few days. Balajadia reminds residents to be cautious and slow down when approaching areas where stores and restaurants are located along the roadways. He says that area in Mangilao is accident-prone.
Mangilao Mayor Nito Blas agrees. He says, “The speed limit hardly anybody honors that observe the speed limit. Here they have the tendency of crossing the street at any given time. I feel sorry for the family but it happens a lot. We’ve had several hit and runs by that side by KFC, dangerous area.”
Chong Chang owns the property across KNS Market and says he sees a lot of cars speeding in the area. He says, “A lot of people are speeding. Even last night, the drunk driver was speeding because the body flew too far.”

In related news, the pedestrian from Monday’s hit and run on Route 1 in Tamuning by AK remains in critical condition and is on life support. Guam Memorial Hospital Spokeswoman June Perez says the man is still unidentified.
As for the 91 year old woman from the Agana Heights home invasion on Sunday, Perez says she is in stable condition.