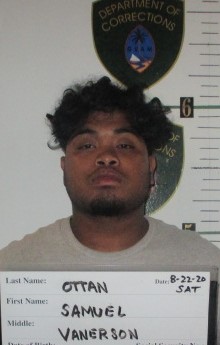 A man has been charged with impaired driving after causing a head-on collision over the weekend, while asleep at the wheel.

Police say around 1:15pm on Saturday, August 22, they responded to a head-on collision in Dededo.

Police arrived and met with one of the drivers, identified as Samuel Ottan.

They later concluded that Ottan fell asleep at the wheel and collided with another vehicle. Police noted that the victim’s vehicle was damaged and towed away. No injuries were reported.

Ottan did not have a driver’s license and police say, he had a slight odor of an intoxicating beverage, slurred speech, bloodshot watery eyes and he admitted to drinking alcohol.

Ottan did not take the SFSTs when asked and refused to take a breath, blood or urine test.

He allegedly told police that he was drinking Heineken from 11:30p.m. last night until about 3:00a.m. Police noted that the crash happened around 1:15p.m.

The defendant told police that he had just left his friend’s house and was making his way home when he fell asleep behind the wheel. Police observed that Ottan “kept on falling asleep” while being questioned.

Police say the man was on probation from a previous case, where he pled guilty to Driving While Impaired.