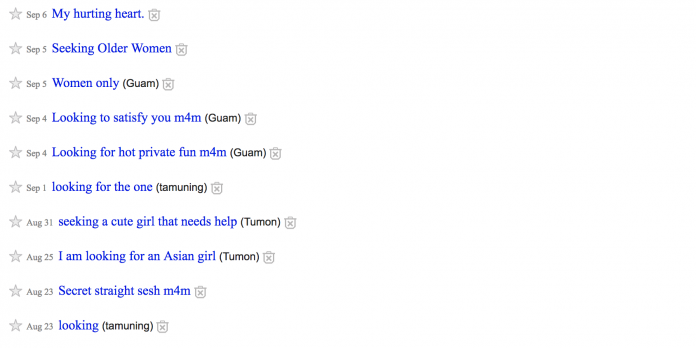 Guam – On TV you may have come across shows like “How to Catch a Predator.” While such shows are filmed in the U.S. mainland, sting operations such as those depicted in the program are also carried out right here on island.

In fact, one such sting operation has led to the arrest of a man who is now standing trial in federal court for the enticement a minor.

There have been nearly a dozen sting operations carried out over the web aimed at tracking down and identifying individuals who target minors. These crimes against children type of sting operations have led to the arrest of several individuals in the last several years.

In this particular case, Wilfredo Lopez was the target of a sting operation. He is facing charges of enticing a minor and transferring obscenities to a minor.

Lopez is a United States Airman who allegedly came across an advertisement on Craigslist’s “casual encounters women for men” subsection posted by a 13-year-old girl identified as Britt. The post was made on October 30, 2017, titled “BORED AF on base” with the body reading, “Hey so I’m just bored I dunno, just want to make friends or something. Im stuck on base cuz I can’t drive but HMU and we can talk or something. Other Mil brats would be cool.”

The government states that Lopez responded to the ad, stating, “Saw your ad on craigslist I’m in the military and I was wondering if I could pick you up and we could go to the lookout. I say the lookout because its discrete and we can do whatever. if you know what I mean.”

Messages between the two went back and forth but according to the prosection, little did Lopez know he was actually corresponding with an Andersen Air Force Base Special Investigation Agent named Adam Ring.

With Special Agent Ring on the stand, San Nicolas presented further evidence of the correspondence, saying Lopez asked the girl if her dad knew she was on Craigslist, further stating, “I’m 29 I could get into a lot of trouble. Im scared because you are so young.”

San Nicolas alleges that not only did Lopez send obscenities but he also attempted to find the girl, stating that Lopez sought out the minor at the base exchange, the library and even her home, all while knowing the girl was 13 years old.

Lopez’s attorney, Jeff Moots, however, contends otherwise, stating that the entire time his client was corresponding with the alleged 13-year-old, he believed she was not a minor and instead that he was being “catfished” and that the person was an adult.

Moots pointed to Special Agent Ring, stating that there was never a minor involved and that it was only a man who posed as the 13-year-old.

“However distasteful you may find what was said or how distasteful you may find the images, if Lopez did not believe he was talking to a 13-year-old, he is not guilty. He wasn’t talking to a 13-year-old. This case is about what was in Wilfredo’s mind. We believe after you look and hear everything that you will say that you don’t believe beyond a reasonable doubt that he is guilty,” Moots said in court.

He further argued that pictures sent to Lopez by the person claiming to be 13 on from the Craigslist ad were of a woman appearing to be 26 or 27 years old, not a 13-year-old girl.