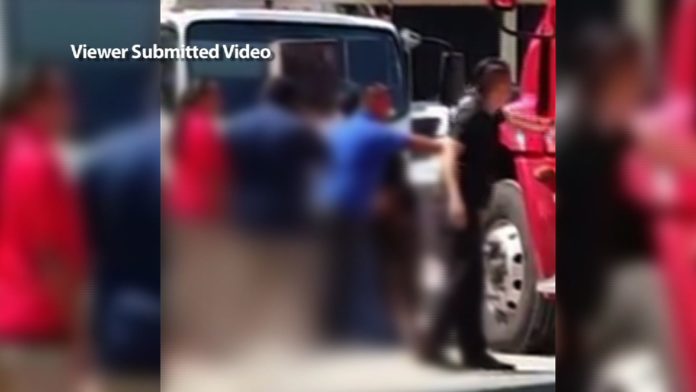 Guam – A tragic accident up in Dededo this morning: a man was rushed to the Guam Regional Medical City in critical condition after he was pinned between a semi automatic truck and a concrete pillar in Dededo.

According to Guam Fire Departments Spokesman Kevin Reilly, The auto-pedestrian accident was reported at 10:51 this morning behind the 76 gas station in Dededo.

A video has been circulating social media and it appears to show the man pinned between a 76 station truck and a pillar.

GPD Spokesman Sgt. Paul Tapao says the man, who was the driver of the 76 fuel truck, was attempting to refuel gasoline storage tanks at the 76 service station when he noticed the truck rolling forward in his direction. According to police, the man tried to stop the huge semi from rolling forward but was instead pinned between the truck and a pillar.

In the video, passersby are seen trying to assist the man. When the truck is finally reversed, the victim’s limp body can be seen falling to the ground.

Tapao says the case remains open and has been forwarded to the Highway Patrol Division.