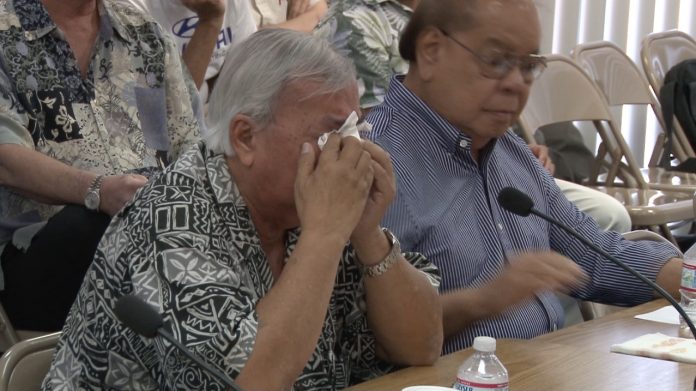 Leo Tudela was testifying at a public hearing for Bill 326.

Guam – A new allegation of sexual abuse at the hands of Guam’s catholic church surfaced Monday at a public hearing. Leo Tudela testified today that he was sexually abused three times back in the 1950’s. Warning, some of the material in this story is graphic.

Leo Tudela testified in front of lawmakers today about three separate experiences in, which he says members of Guam’s church sexually abused him back in the 1950’s. Tudela, who grew up a strict catholic in Saipan, came to Guam under the tutelage of Father Arnold Bendowski. ‘Father Arnold’ brought Tudela here to be an altar boy at Saint Teresita church. It was at this church that Tudela was asked to join the boy scouts. Tudela then tells the story of the second time he was sexually abused; Tudela alleges that at a Boy Scout meeting, a high member of the church named only as ‘Igancio’ told the young scouts to stand in a straight line.

“One night, we were told to stand in a straight line and the scout master…he drew a line for us to stand and he drew another line about 3 or so feet in front of us. He told us to take our pants down and start playing with our penis and if our semen did not reach the line drawn in front of us, we would be given all the work that has to be done at the camp. If we reached the line, then we would not have to do anything,” said Tudela.

Tudela also alleges that Father Louis Broulliard, a priest at the Sinajana rectory, sexually abused him. Tudela was testifying for bill 326, which if passed would lift the statute of limitations on sexual abuse in civil cases. He says he has lived with these quote ‘evil incidents’ for 60 years. He says he wants what any victim of sex abuse wants…. justice.

Tudela says, “All I want is justice, due process of the law and people who did this and condoned these actions, to accept responsibility for their evil acts and to have closure and to start my healing process after over a half century of pain and suffering.”

Dr. Zoltan Szekely was the only man to testify in opposition of the bill. Dr. Szekely, a resident of Yona, called out Blogger Tim Rohr and Concerned Catholics of Guam President Dave Sablan. Dr. Szekely says, “calling catholic believers and consecrated priests by dehumanizing terms, like cancer, is revealing a vicious agenda of political intent that cannot be supported by any respectable legislation with stature or integrity.”