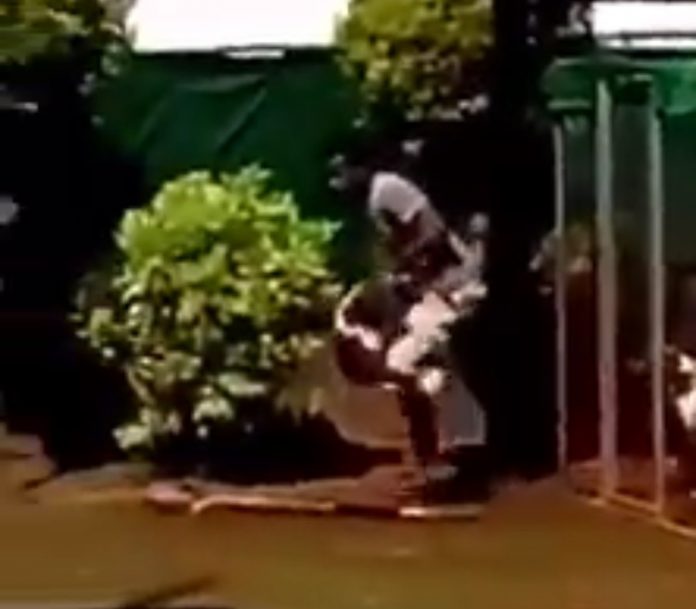 You can view the video below. One dog suffered from possible internal bleeding, bruising and damaged kidneys. The other dog has a fractured leg, scattered wrist, internal injuries and bruising.

Guam – A shocking video showing what appears to be two pit bulls being beaten and slammed to the ground is going viral on social media.

Bustamante says Borja worked as a handyman and often took care of his lawn and even fed his dogs at times. The video, he says, was taken just this morning.

Bustamante tells us that he was on his way home this morning when he got a text message from Borja telling him he wanted to quit. When Bustamante got home, he says Borja was on his way out, but before Borja left, Bustamante says he got a phone call about what Bustamante had done to his dogs, which Borja heard since the call was placed on speaker.

Moments later, Bustamante says Borja swung at him and tried to attack him. Bustamante immediately called 911 and police arrived about 15 minutes later. All this happened, he says, before he saw the video.

When Bustamante finally viewed the video, he says he was shocked and angry.

“I never thought that a person could be so inhumane to try and kill a dog,” Bustamante says. He also says that he loves his dogs as much as he loves his children. “I don’t raise them to breed them. I treat them like they are my children,” he told us.

Bustamante also wants to thank the community for the overwhelming support and he says he feels the public’s help in sharing the video on social media has prompted police to respond more aggressively.

With a wife and young children, Bustamante says he’s worried for his family’s safety and he believes Borja to be capable of doing harm to others. Bustamante notes that before leaving his residence this morning, Borja even threatened to kill him.

He says he’s communicating with Guam Police and wants Borja arrested immediately before he can do more harm in the community.

Animal cruelty is a felony on Guam and carries a punishment of up to five years in prison. However, the penalty could increase for repeat offenders. Borja is a registered sex offender.

Police Spokesman Officer AJ Balajadia says Borja is in custody and police are currently questioning him.

WARNING: Graphic video. It may not be suitable for some viewers.