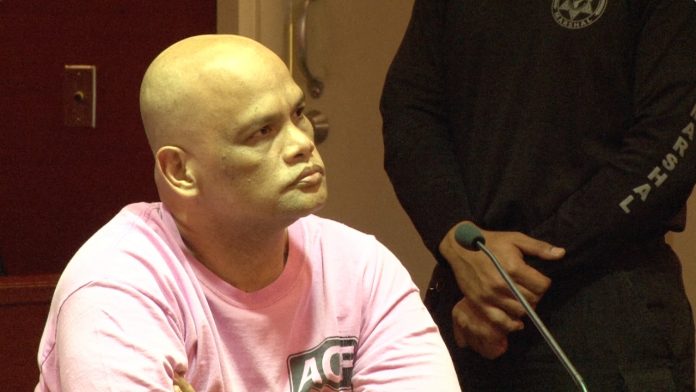 Raymond Tedtaotao was convicted last year to 55 years for his role in a Nimitz Hill home invasion case that left the victim paralyzed.

Guam – The man behind the Nimitz Hill Home Invasion case is getting 10 years shaved off his prison sentence. On Monday, Raymond Tedtaotao was sentenced for the third time in this case after he won an appeal.

For the third time since his arrest for his role in a home invasion case, Raymond Tedtaotao was in court to be sentenced. Prosecutor Sean Brown argued for a max sentence for Tedtaotao.

Brown says a max sentence for Tedtaotao would send a message to the people of Guam as well, showing residents that they are protected. Meanwhile Tedtaotao asked for leniency.

“My good behavior, ever since I got sentenced, I haven’t gotten into trouble. I never got written from the department of corrections so I’m asking could you run it concurrently,” said Tedtaotao.

At one point, the victim of the home invasion case spoke via telephone. Rebecca piper made a plea to the courtroom to give Tedtaotao the max sentence. Piper said it would take her the rest of her life to get better while Tedtaotao will likely only serve 45 years in jail. Piper is partially paralyzed.

“The court hereby sentences you to the maximum under the statute of ten years of imprisonment. The sentences are to run consecutively with credit for time already served,” said Cenzon.