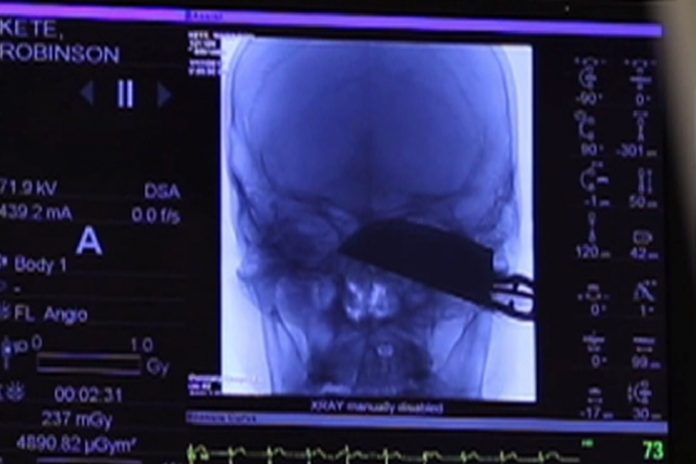 The victim of last weekend’s stabbing is now conscious thanks to the surgical team at GRMC.

Guam – The Guam Regional Medical City delivered an update of the victim stabbed with a knife above his left eye.

It took several hours of surgery and a team comprised of six specialists to surgically remove the knife protruding from Robinson Kete, the victim of a stabbing in Dededo.

“The critical element of this procedure and why it had to be done here and why it required such a prolonged period was all of the prep leading up to it, because the removal of a foreign body like this is not a difficult or complex thing, but you have to be prepared for any eventuality,” he said.

According to Dr. Weingarten, the knife was “thoroughly lodged” just above the victim’s left eye leaving only a millimeter of room to work with. Using a clamp and a mallet, the knife was expertly removed in only two minutes. But according to Dr. Weingarten, once the weapon was removed, it left a tiny spec of air which could present further problems down the road with the possibility of meningitis or other infections.

“The thing that makes something like this dangerous is the number of different structures that could potentially be involved. The knife passed literally within about one millimeter of his carotid canal and that’s an incredibly large important artery which depending on where you damage it could bleed into any number of other structures and can be life threatening,” he said.

Dr. Weingarten says the patient awoke this morning and shared that only time will tell if all of his left eye functions remain intact.