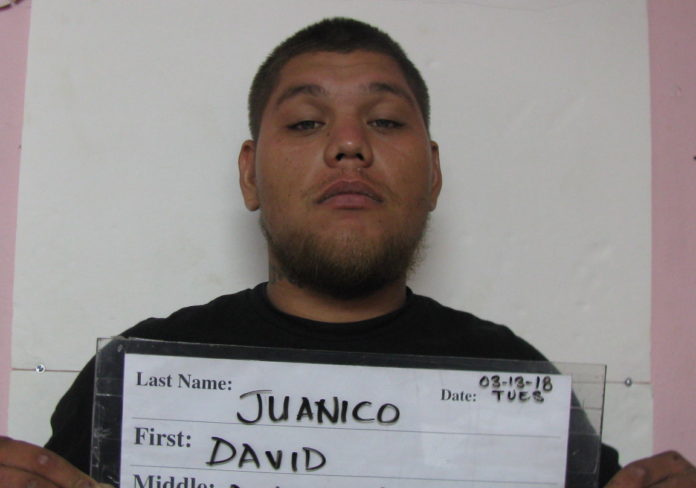 Guam – A man is behind bars after he allegedly assaulted his girlfriend several times over the course of a day but according to the man the injuries she sustained were not caused by him, but by the “Taotaomo’na.”

“Taotaomo’na gave her the bruises, she is crazy, [expletive] that [expletive]. When it comes to family violence, you guys believe the chicks.”

That is what David Anthony Juanico allegedly told police officers when they arrived to their home in response to a disturbance on March 12. According to court documents, Juanico began assaulting his girlfriend Deshanny Jaerica Santos at around 1:10 p.m., accusing her of cheating.

During this incident, Juanico allegedly began punching her on her right arm as she was driving to a store in Agat. The victim told police that she attempted to call 911 but Juanico took her phone and threw it on the floor board.

The complaint states that the victim then pulled into a residence and began honking her horn in an attempt to gain someone’s attention. It was then a female individual approached the vehicle. The victim asked her to contact the police.

In response Juanico allegedly told the female, “you better not call the police.” It is alleged that Juanico then drove the victim to a residence in Tamuning where they spoke and “everything was fine.”

But it appears that was only temporary, as the complaint states that several hours later, when Santos arrived home to drop food, Juanico once again began accusing her of cheating. He again pushed her into the passenger seat and she stuck her head out the window screaming for help as they drove away.

According to police, Juanico took the victim to an area on Cross Island road where they spoke before heading home.

Once home, court documents state that Juanico became upset once again, this time over a missing ice pipe. The victim told police that he had ordered her to find his ice pipe but she refused. This angered Juanico who allegedly began threatening the victim, stating, “I’m going to [expletive] kill you. You better look for it.”

It was then that GPD officers arrived at the home were they noted bruises on the victims upper left back and forearm, and shattered glass in the vehicle. But according to court documents, Juanico denied assaulting his girlfriend, blaming the bruising on the “Taotaomo’na.”

Taotaomo’na are the ancestral spirits of the Chamorro people.

According to the court complaint, Juanico was found in the possession of methamphetamine and attempted to bribe the officers into letting him go.

He has been charged with possession of a schedule two controlled substance, strangulation, interfering with the reporting of family violence, felonious restraint, assault, family violence, criminal mischief and obstruction of government operations relative to bribery.

Santos was also charged with hindering apprehension as she initially denied the assault in an attempt to keep her boyfriend from going to jail.