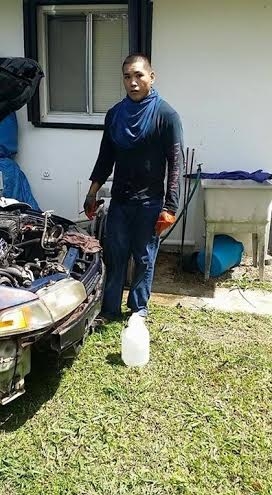 27 year old Justin J Cruz arrested for burglary, a stolen vehicle, fraudulent use of a license plate and violation of parole.

Guam – A man who claimed he just needed water to fill up his overheating car was arrested for burglary, a stolen vehicle fraudulent use of a license plate and violation of parole.

The complainant came home from work during lunch and noticed a man at the back of his house looking at his bathroom window as if trying to scale it. When approached the man told him that he was getting water for his car because it was over heating. The man was wearing gloves and had a screwdriver in his hand. The man also told the complainant that he was test driving his car which the complainant found suspicious because the man said he lived in Toto and the complainants house is in Chalan Pago.

The complainant took pictures of the man and his car reported it to the police and posted it on Facebook. According to GPD, PIO AJ Balajadia officers from the Hagatna precinct command responded. A witness also reported that the suspicious man appeared to be trying to open the complainants bathroom window. Officers ran the plates of the vehicle and they did not match the description of the vehicle. Officers determined that the vehicle the man was using was stolen. The vehicle was later located in the Toto area where it was on fire. The man was recognized by officers as someone who was on probation. GPD contacted DOC parole and they arrested 27 year old Justin J Cruz. He was booked and confined.