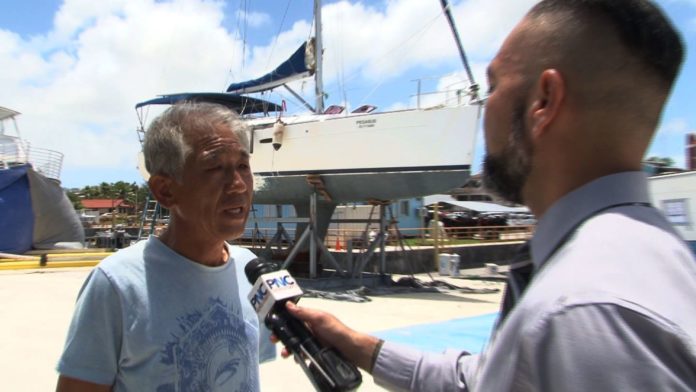 Guam – Remember the sailboat that crashed in the reef in the Agat marina back in February? Well the man who sailed that boat is still stranded here on Guam trying to figure out a way to repair his sailboat and go back to his home in South Korea. He’s an interesting life-long seaman named Myeong-Seon Cho who was recognized by the United Nations for rescuing Syrian refugees from a sinking boat. Cho now finds himself shipwrecked on Guam.

“My life was a seaman’s life full life but during my seaman’s life I did not travel the South Pacific islands,” said Captain Cho.

After retiring from the life of a commercial ship Captain Myeong-Seon Cho decided to sail the seven seas so he bought himself a sailboat in the U.S. Virgin Islands. He spent 4 months sailing the Caribbean before making his way to the pacific. On his way back to Korea he stopped on Guam but unfortunately, he had an accident. Cho believes the entrance buoy into the Agat marina was too close to the shallows. He claims he followed the buoy and ended up on the reef.

Cho says he also tried to make an insurance claim but was denied because he did not have a person on the bow of the sailboat when he was entering the marina.

“I have to do myself no choice,” said Captain Cho.

Cho had no choice but to self-fund the salvage of his sailboat which is now dry docked at the Agana marina. “Not enough money so now I stay in the boat,” said Cho.

“And how are you? Do you have money for food and things like that?” asked PNC.

“I almost broken so I borrow from my sister,” said Cho. “

“Almost broke so you borrowed money from your sister?” asked PNC.

“Is your sister here or from Korea?” asked PNC.

Cho is an interesting man who once rescued 387 Syrian refugees in the Mediterranean sea.

“Seaman’s life when we meet some person dangerous or need some help we should help,” said Cho.

And that’s exactly what Cho did back in 2014 when he was the captain of the AMS Pegasus, a freighter operated by Korea Line Corp.

“In the early morning looks like something strange so I say what is that what is that?” said Cho.

It turns out it was a sinking wooden boat filled with refugees who had been adrift for 15 days without food or water.

“I collecting the person on board and delivery to the Italy coast guard,” said Cho.

Cho is rather humble about the experience but according to an article on the Korea Times the Korean office of the United Nations High Commissioner for Refugees (UNHCR) head Dirk Hebecker, personally praised Captain Cho for “a courageous act.” Hebecker is quoted in the Korea times as saying “often commercial ships turn a blind eye to these boats in need of help and do not extend their help. Every time we have a case like yours, we really welcome it.”

“You know the boat name is Pegasus because before I saved the person is Pegasus so I put the name, same, Pegasus,” said Cho

Cho named his sailboat after the commercial ship he captained when he rescued the refugees. In a strange twist of fate Cho himself is now shipwrecked and stranded on Guam.

Cho says he has found someone who can make the repairs to his sailboat something which could take another one to two months. Once the Pegasus is patched up, Cho will continue his adventures on the open seas.