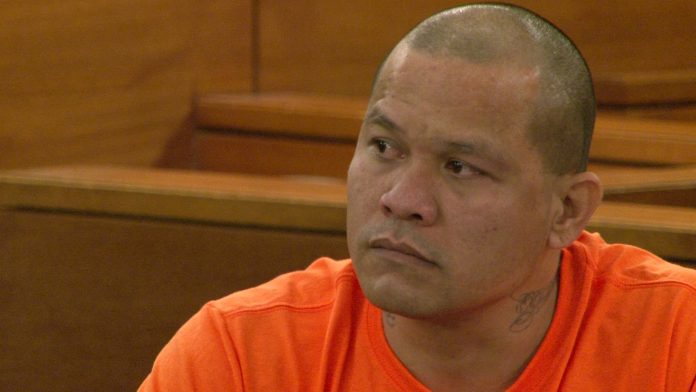 The victim’s mother, Audre Hattori, revealed in court today that her daughter had tried to warn her about her safety.

Guam – The man who shot his girlfriend in the neck over burnt rice was sentenced today to life in prison with the eligibility for parole after 35 years. The victim’s mother made an emotional statement, while San Nicolas’ sister had a response as well.

“The defendant may get some homemade cookies at Christmas and I, I visit my daughter at Pigo Cemetery.”

Audre Hattori could not hold back her tears as she spoke about her beloved daughter, Valene Borja. Borja died in January 2014, exactly a year after she was shot in the neck. And today, Hattori faced the man who killed her daughter, Clifford San Nicolas.

“The defendant is going to beg for leniency and compassion so that one day he may walk out of prison and I, I visit my daughter at Pigo Cemetery,” Hattori repeated.

Hattori described the trauma her daughter and her family went through in the year Borja survived. She says it wasn’t until about two to three months after she was shot that Borja began to realize the gravity of her situation. Borja was bedridden, paralyzed from the neck down.

Hattori says as the months passed, Borja’s facial expressions began to change from sadness to dismay, then anger, panic and finally fear. Toward the end of her life, Borja could no longer speak so she spelled out words by pointing at letters. Hattori describes the horror in one of her messages.

“The sentence formed, ‘please, please move out of the house,'” Hattori said. “Again making sentences, ‘Please go live with grandpa.’ I’m like why, why. Again, pointing letters, ‘You are not safe there. He will kill you.’ It suddenly made so much sense to me. The threat of violence was not on her own life; the threat was on those that she loved.”

We asked Assistant Attorney General Brian Gallagher if the AG’s Office was aware of these threats and whether they were considered serious.

“That was not something we’d ever discussed before,” said Gallagher, who noted this was the first time he’d ever heard of these threats.

On the defense side, San Nicolas’ sister, Renee San Nicolas Castro, addressed the court, describing her brother as a good person who was addicted to drugs. She then responded to a question brought up by the victim’s mother. Hattori had questioned why her daughter continued to return to San Nicolas despite his history of domestic violence.

“And the answer to your question about why did Vi turn back to Clifford, it’s because she loved him,” Castro asserted.

Finally, it came time for sentencing.

And since his life sentenced requires a minimum of 15 years before he’s eligible for parole, coupled with the 17 and 3 year consecutive sentences, this means that San Nicolas will be in prison for 35 years before he can ask for parole.