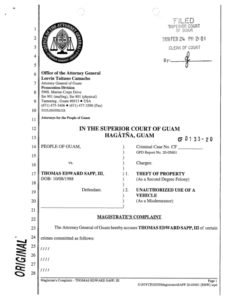 A search launched Sunday morning by the Guam Coast Guard for what at the time was thought to be a vessel in distress ended with the arrest of the man who called in the distress report.

31-year-old Thomas Edward Sapp III has been booked and confined on allegations of unauthorized use of a motor vehicle, theft of property and criminal mischief.

The motor vehicle in question was a tour boat owned by Atlantis Guam.

According to the magistrate complaint, Atlantis Guam Manager Eric Barcinas met with Guam police at the Hagatna Boat Basin at about 8:30 am Sunday morning.

Barcinas told police that one of Atlantis’ vessels had been taken by Sapp who was supposed to operate the boat for a charter that day.

According to the complaint, a witness told police that Sapp “did not seem in the right state of mind to be operating the boat.”

When the boat was recovered, Atlantis employees noted that several items were missing.

Those items included adult and child life jackets, first aid kits and flares. A white marine box speaker was also damaged. The damage was estimated to be $3,620.

Unbeknownst to Barcinas, about an hour before he lodged his complaint, the U.S. Coast Guard had launched a search for the vessel, a search that went on past noon and involved the Navy and the Air Force.

U.S. Coast Guard Command Duty Officer Lee Putnam told the Pacific News Center Sunday that the call for help came in just after 7 am on the VHF Marine Band radio from a man reporting that his vessel was in distress.

The man told the Coast Guard that he was about 12 miles west of the entrance to Apra Harbor and he was “dead in the water,” said Officer Putnam.

The man did not respond to additional calls from the Coast Guard and communication was thought to have been lost.

During the first two hours of the search, a 45-foot U.S. Coast Guard fast-response cutter recovered three life-vests, a cooler and other items in the area north of the Glass Breakwater where the distress call originated.

It was feared that the vessel had sunk, leaving three boaters in the water.

About 9:30 a.m. the Coast Guard called in one of the choppers from the Navy’s Helicopter Sea Combat 25 squadron at Andersen Air Force Base. An Air Force twin engine C-12 was also dispatched.

Sunday afternoon, however, Officer Putnam confirmed the search was called off after Guam authorities informed the Coast Guard of Sapp’s arrest.

According to the magistrate complaint, Sapp told police he took the boat out “to fish a little” but he “got caught in the swells and the boat had died out for a while.”

He said he was able to fix it and brought it back to the Hagatna boat basin to dock, where he was arrested.