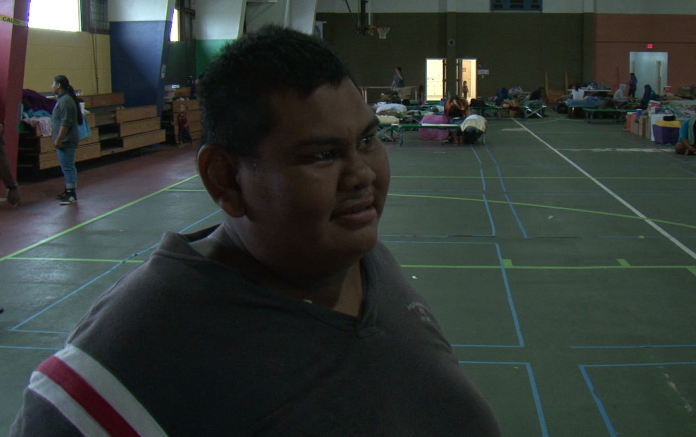 Guam – A man who appears to suffer from memory loss is putting a call out to the community to help him find his family after he got lost during Typhoon Mangkhut.

Jason Espinosa, who’s about 18 or 19 years old, is currently housed at the Astumbo shelter along with 200 other displaced residents.

Dededo Mayor Melissa Savares says she’s familiar with Espinosa’s story but only based on what he’s shared with her. Espinosa’s parents and siblings left to the states years ago when he was still a minor and his grandparents have also passed away.

Savares believes Jason has no immediate family on Guam but he may have been staying with other relatives or friends before the storm hit. While PNC was at Astumbo gym this morning, Jason approached us asking for assistance.

“I was in the out in the street for like three–I forgot to go home. But since the typhoon came I came here to be–the other schools, then they have me here for Astumbo,” he told us.

Jason also says he was living in Chalan Pago prior to the storm. For now, Mayor Savares says she’s working with GHURA and Guam Housing to help Jason and others like him get into a housing program to get them off the streets even if they were homeless before the storm.

If you have any information about Jason’s family or his life before Typhoon Mangkhut, you can contact the Dededo Mayor’s Office 632-5203.