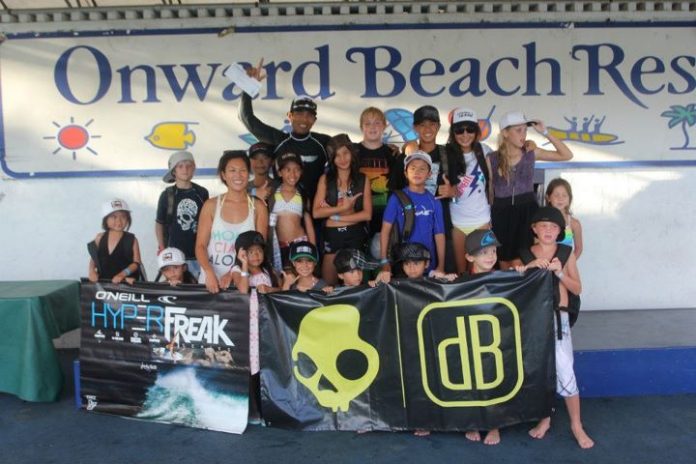 Tamuning, Guam – November 6, 2011 – Guahan O’Hui Nalu hosted it’s first “Mañahak Surf Contest” this past Sunday at the Onward Beach Resort. Not only was this event the first of its kind, but it was also the first time that many, if not all, of the competitors have ever participated in a surf contest.

Sixty Eight of Coach Joe Villatora’s students from Guahan O’Hui Nalu, some as young as three years old, took to the wave pool, vying for top honors in their respective age divisions. But for the kids, the reward was clearly in their pride in learning a new and exciting sport and being given the chance to show off their skills to their family and friends who came to support them.

The kids delivered their best efforts, and displayed the kind of fearlessness and determination usually seen in more experienced athletes. Each competitor had such a unique and memorable style that as early as the first heat, spectators were able to identify each surfer and pick their favorites! Although every surfer did an amazing job and deserved recognition, only the top four boys and girls of each age division were able to advance to the finals, a decision that was undoubtedly difficult, given that most of the competitors were separated by mere fractions of a point.

During the final heat, the excitement of the contest had not died down one bit, but had escalated ten-fold as the top four boys and girls of each division caught their final 4 waves in a no holds barred show of best tricks!

The top two finishers of each age division were awarded with cool O’Neill backpacks filled with gifts and prizes from the presenters and sponsors. For the 3-5 years old division, Myra Lacuata and Philicita Rivera took top honors for the girls, as did Dylan Baker and Dustin Dahl for the boys. Minami Cramer and Trina Lacuata took the top girls’ awards for the 6-8 years old category, while Every Alexander and Daxtor Gourly represented for the boys in the same age group. The 9-11 years old category was dominated by Monica Gieger and Megan Baron for the girls, and Jake Lamb and Caleb White for the boys. Finally, Gabi Mantanona and Lorin Lambert dominated their heats against the rest of the girls in the 12 and up division to take the winner spots. The boys in the 12 and up age group did not disappoint either, with Misaki Cramer and Collin Gourly walking away as top winners.

The support and efforts of everyone involved in an event like this hopefully inspires the youth to continue to harness their skills and love for their chosen sport. It also promotes making healthy and fulfilling lifestyle choices, which we can only hope will create a ripple effect within the community.

Who knows maybe the next Kelly Slater will be from Guam…

Informatioin from a press release.