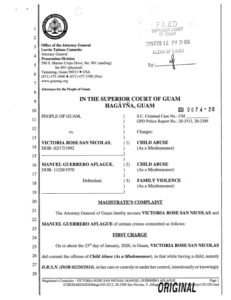 A couple has been charged with child abuse after Guam Police discovered six children living in deplorable conditions in Mangilao.

A declaration in the Superior Court of Guam, states that GPD officers received a call on the evening of January 23, about the abuse of a 5-year-old girl.

The court report states that the minor child had previously been diagnosed with leukemia and received off-island treatment. She has been in remission since 2018.

In the court document, the grandmother claims that when she threatened to call police about the abuse, Aflague grabbed her cell phone and allegedly said he would kill her if she did not leave the residence. The grandmother left with her husband and reported the alleged abuse to the Guam Police Department.

The grandmother told police that two of the older minor children had previously confided in her that Aflague disciplines them “in an abusive manner,” but that they were “too scared to tell anyone.”

The following day, on January 24, GPD officers showed up to the family’s house in Mangilao. They found the six children “sleeping and unattended inside a dilapidated and uninhabitable shack,” according to the court document. Officers said the house did not have a door, there was trash on the floors, cockroaches, non-functioning toilets and no running water.

Three of the children were found sleeping on a dirty mattress, one was in a car seat, one on a “worn-out” kid’s chair and one on the bare floor. The officers did not find the parents at the house, and a witness had told them the parents had left at least 30 minutes prior and had not returned.