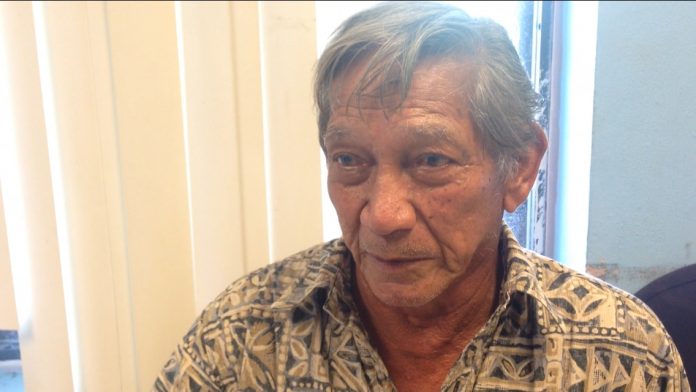 Mayor Nito Blas admits he took his pants off because it was his inner thigh that was in pain, but says he never asked the woman to do anything “inappropriate.”

Guam – Mangilao Mayor Nito Blas has been arrested, accused of exposing his genitalia to a woman while at his office. But the Mayor tells PNC that he did nothing wrong. He says all he asked for was a massage.

“I didn’t do anything. I didn’t even offer for [sic] anything other than massage,” the mayor tells us.

Mayor Blas says all he did was ask for a massage because his inner thigh was in pain and the lady agreed to give him one. Mayor Blas and the woman agreed to a price of $10 for 15 minutes, but the mayor tells us that he only had $4 on him at the time, so he told the lady he would pay her back later.

“In order for me to get my massage–because I have a lump–I have to take my pants off,”he admits, pointing to his inner right thigh. Mayor Blas says he kept his underwear on.

“I don’t know what makes her think … she didn’t even touch … and I didn’t offer you know. I didn’t ask for anything else except a massage.”

Mayor Blas says although it happened inside his office, he did leave his door open and there were other people around other areas of the Mangilao Mayor’s Office facility. He says he’s never seen this woman before but had heard around that she was good at giving massages.

PNC asked whether he thought it was appropriate for him to ask for or receive massages in his office, Mayor Blas says, “Well, when I think about it now, I tell you what, it’s never gonna happen again. And you’re right, it’s not appropriate. It’s my mistake so I learned my lesson.”

Mayor Blas says he’s never met this woman before and he tells us that she was performing community service for the Judiciary of Guam under the probation division.