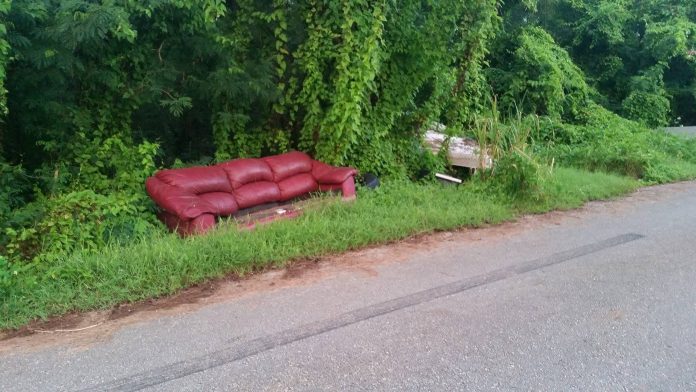 Reports of illegal dumping by residents prompted one mayor to voice his concern.

Guam – The Mangilao mayor says he’s faced with an illegal dumping problem in residential areas of his village. In fact, he even has a name for one area, specifically at Iglesias Street.
Mangilao Mayor Nito Blas says, “I call it the Iglesias dumpsite because that’s a lot to clean.”
Just last week, a viewer sent us these photos of Iglesias Street. As seen in the photos taken, couches, worn out mattresses, tires, buckets of paint, and television sets were just a few of the rubbish dumped by the side of the road. Mangilao Mayor Nito Blas says Iglesias Street is just one of the many areas where residents dump their trash.
Blas says, “In this area, it happens all the time, in this area. Usually it happens there by Ladera Tower, but we’ve been making an effort to clean it a little bit at a time, but this one, we can’t catch them.”
Blas says every time his office receives a report about littering in his village, his staff goes to the site and cleans it up. However, Blas says he’s frustrated because it seems as if there’s no end to the dumping of trash in these areas.
He says, “If we get rid of one couch, three couches will come back. If it’s one couch or one thing, me and my wife can do it. Sometimes me and my wife pick it up if it’s minor stuff. Right now I think if they give me taxpayers funding, I’ll hire equipment, a back hoe and a dump truck to haul that up.”
Blas says if the junk piles up to an extent where his staff is no longer capable of cleaning it up themselves, he says his last resort is to use taxpayer’s money to clean up the sites. He asks that the community respect the village and help put a stop to pollution by keeping an eye out and reporting illegal dumping to officials.
Blas says, “Just call our office before it gets beyond control and we can do it ourselves. We ask them if they have anything to dispose off, if they can’t do it themselves, call us and we’ll do it we’ll help them, it’s that easy. I try to convince people that live in that area to keep an eye or report the license plate to my office or call GPD if somebody is throwing stuff there but this is known as the Iglesia’s dumpsite for the longest time.”