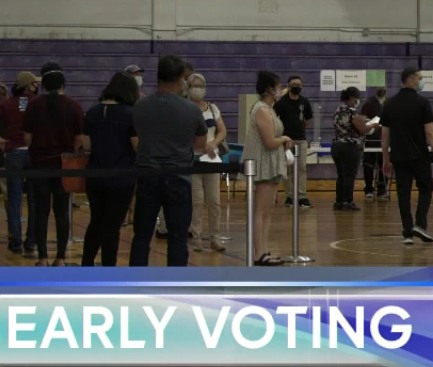 686 individuals voted at the George Washington High School on Saturday, the second outreach effort by the Guam Election Commission to bring the polling sites to the villages.

This is the biggest tally in a day so far, according to GEC Executive Director Maria Pangelinan. The first satellite voting in Malesso last week yielded 419 votes.

Pangelinan estimates that Guam currently has around 55,400 registered voters. And she believes that the voter roster is growing.

For those who have yet to register for the election, Pangelinan reminds the community that they can come to the GEC headquarters at the GCIC building from Monday to Friday, from 9 AM to 6 PM or at the satellite locations during the weekend.

At those two sites, they can register and vote at the same time until Oct 23.

After Mangilao, GEC will be heading to Yigo for its next satellite voting location.

“On Saturday, October 10th…that’s Saturday..the village of Yigo will be hosting the Guam Election Commission at F.B. Leon Guerrero Middle School. We are anticipating maybe using the Simon Sanchez parking area. We can accommodate our curbside voters much better…minimizing the wait time,” Pangelinan said, in a NewsTalk K57 interview.

At the polling site in the northern village, GEC will start serving voters at 9 AM and they will continue to accept voters until 4 p.m.

Pangelinan says GEC will still serve those who are in line by the 4 p.m. cut off.

GEC intends to reserve the 9 a.m. slot on Saturday for manamko and those with disabilities.

Any changes to the schedule will be announced through GEC’s media partners.

Meanwhile, for those who want to vote early and to avoid waiting in line, the best way
would be to call the election commission at 477-9791 to set an appointment.