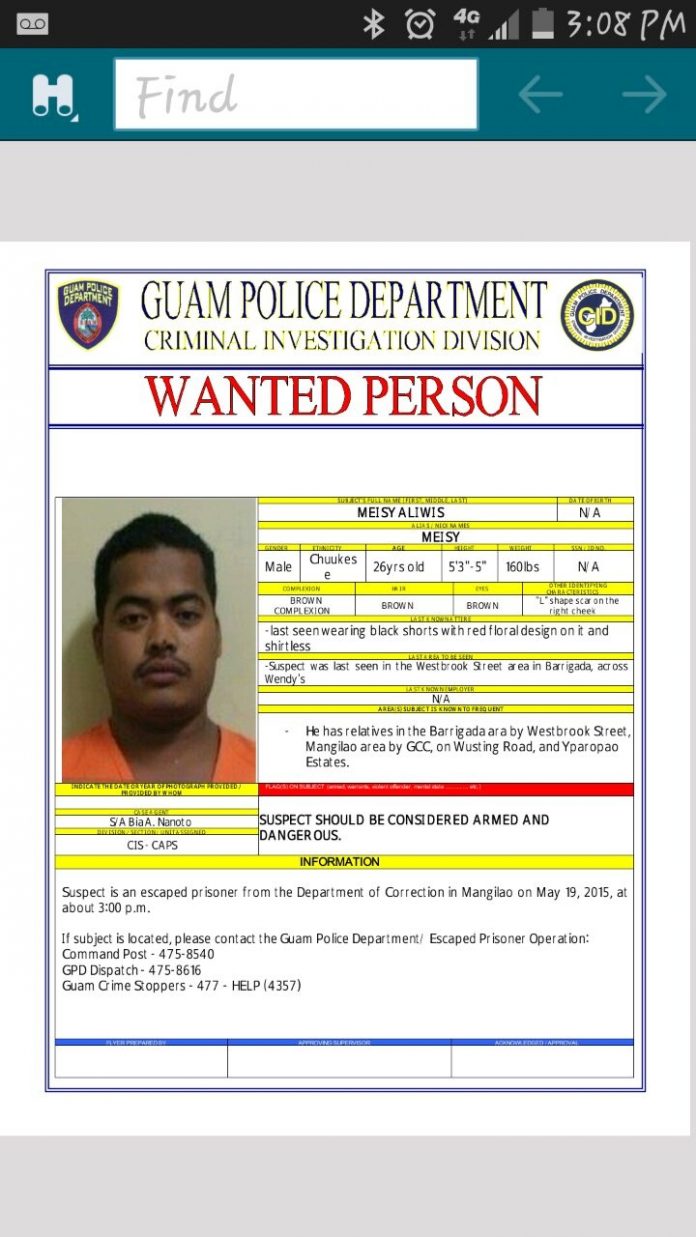 Meisy Aliwis is considered dangerous and the public is advised not to engage him if seen.

Guam – Law enforcement officials continue the manhunt for a prisoner who escaped from the Mangilao prison compound yesterday afternoon, working the jungle areas in the vicinity of the DOC over night and spreading out into other villages throughout today.

As of news time, Department of Corrections Deputy Director Carla Borja says Meisy Aliwis has yet to be caught. She explains how corrections officers first discovered Aliwis had escaped.

“On Tuesday, May 19, 2015, at approximately 3 pm, a detainee by the name of Meisy Aliwis was called for an attorney visit. Officers noted that the detainee was not at his designated housing unit. So after a head count and a perimeter search, [we] confirmed that he was no longer on the premises. We activated search teams following proper protocols,” says Borja.

The search team is made up of DOC corrections and parole officers, Guam Police, Superior Court Marshals and the United States Marshals Service.

“These search teams worked through various external locations and targets that we received from intel throughout the evening to no avail, unfortunately,” notes Borja.

Borja explains that Aliwis was being detained in post 18 which consists of only pre-trial detainees. Borja says each cubicle has more than one detainee, adding that the door to the cubicle does have a locking mechanism.

“We are looking into how and why the detainee has escaped from our facility and then as soon as we get those answers we will inform the public,” says Borja.

Borja says Aliwis is considered dangerous and asks the public not to engage him if spotted.

Guam Police Spokesman Officer AJ Balajadia says although DOC did suffer a power outage during the typhoon last Friday, they were being powered by backup generators.