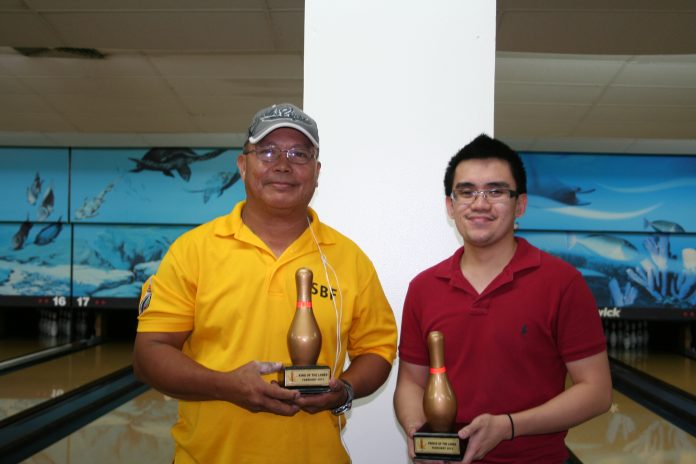 Guam – The February edition of the Budweiser King and Prince of the Lanes produced exciting matches from the onset of the championship as Ray Manibusan and Erwin Aguilar were crowned with the respective titles.

Manibusan rose from 4th seed to defeat both top seed Joey Miranda III and 2nd seed Duane Camacho in the final and semi-final round. Manibusan edged Miranda in an exciting finals match as lead changed hands in four occasions until Manibusan struck in the 10th frame for a double connecting on the foundation frame to seal the victory with a 206-198 set. In the semi-final round, Manibusan ousted 2nd seed Camacho in the same manner for a 194-176 victory while Miranda struck out in the last frame to edge out 5th seed Dante Godoy in a strike fest with a 243-233 win.

The quarter final round also provided suspense as Godoy was forced to strike out in the tenth frame to get past 7th seed JD Castro 232-225 while Manibusan was able to overcome a slow start to beat out his daughter and 9th seed Teliann San Nicolas 216 to 183+3 to advance to the semi-final round.

Joey Miranda III led all qualifiers with a 1238 total on the tight playing short oil pattern. Miranda bowled a 238 fifth game which allowed him to retake possession of pole position from Camacho who finished second with an 1199 six game set joining Miranda for the two round byes. Mid series leader Jim Pinaula was unable to sustain pole position falling to 3rd place with an 1161 total followed by Ray Manibusan 1112, Dante Godoy 1075, Ray San Nicolas 1044, JD Castro 1039, Brian Manibusan 992, Teliann San Nicolas 983 and Greg Borja’s 969 rounded off the top ten who proceeded to the elimination rounds.

Erwin Aguilar was finally able to hoist a championship trophy as he picked two of the three remaining pins on the fill frame during the finals match to defeat 3rd seed Leody Ersando by a one pin margin 174+24 to 168+29. Aguilar took early control of the game with a double. However, Ersando was able to come within striking distance all the way to the final frame as his consistent stroke fell short of a victory.

Early exists by high seeds were the menu for the first elimination round in the Prince Division as 10th seed Roy Duenas moved to round two with a 192+12 to 136+24 win over 5th seed Kennedy Robinson, 7th seed Bou Kyung Jung showed 6th seed Maddison Willis the exit sign winning her match 167+33 to 159+27, and 8thseed Arlene Taitague wrapped up her match with a 181+25 to 160+24 set over 4thseed Shannon Bukikosa. The only higher seed bowler to advance was 3rd seed Leody Ersando who narrowly escaped by 9th seed Paul Kaneshiro 194+29 to 181+35.

The next Budweiser King and Prince of the Lanes will be held on Sunday, March 25, 2012 at Central Lanes Bowling Center, Tamuning at 11:00 a.m.