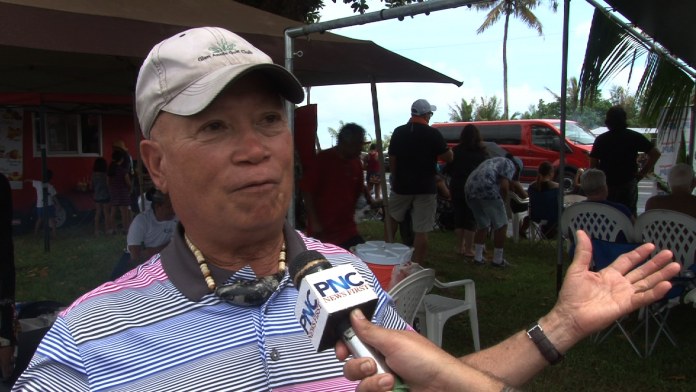 Guam – Thousands attended the Liberation Day parade but not everyone who attended lives on Guam. In fact, many Chamorros who live in the states come back to Guam just for Liberation Day.

David Anderson is from Santa Rita but he’s spent the last 40 years living in Santa Barbara, California. For the last 35 years he has been coming back to Guam every year just for the Liberation Day parade. PNC asked Anderson why he chooses Liberation Day to return to Guam. “Because of the festivities you know the Chamorro Village and the parade and the people the picnic. I mean it’s a bunch of happy people here. I love it,” said Anderson.

Although he enjoys the festivities, Anderson says Liberation Day holds an even deeper meaning for him. “I remember what my mom and dad said when they were going through the war and there were some horrific incidents and I’m just glad they’re alive because they went through a lot of stuff. A lot of hell,” said Anderson.

Anita Blas made her way to Guam all the way from Las Vegas for Liberation Day. “To join the festivities and to have fun. To be with my family and my siblings and that’s it,” said Blas. The Las Vegas resident had a lot of family joining her on the parade grounds. “Blas, Cruz, Camacho, Duenas, Guerrero, Rivera, Cheche,” said Blas as she named the different families who were gathered at their canopy.

Blas also knows that Liberation Day is about more than just barbequing at a parade. She says it’s about remembering those who suffered and died on Guam during World WarII. “My father was a scout leader to show the Americans where the Japanese were hiding and then my mother her name is Clementina Materne Blas. She was slapped by the Japanese when she was young when she didn’t bow,” said Blas. Despite the tragedies of war, Blas doesn’t hold any grudges. “But you know what my mother they learned how to speak Japanese during those times because that’s what they told us when we were little. And then my son is married to a Japanese lady in Japan so you know what, we’re just one family and everybody gets together.”