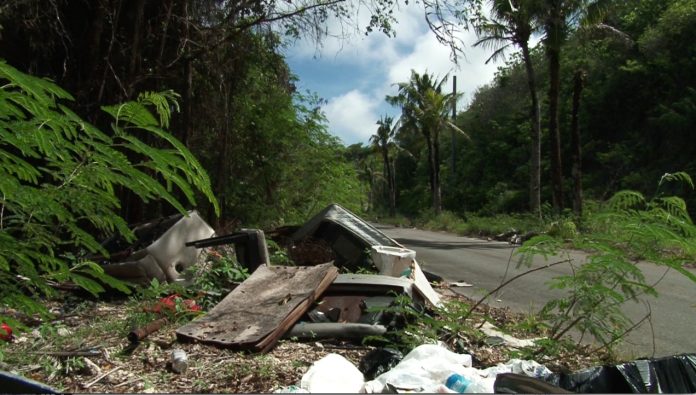 There were several dumpsites leading up to and at the parking lot of Marbo Cave in Mangilao.

Guam – Another Day, another scenic view ruined by illegal dumpsites; PNC found that once again the Marbo Cave in Mangilao has been marred with trash.

The general components of the story sound the same as the Jonestown lookout…. A scenic view on Guam littered with Illegal dumpsites. A private property owner and a mayor speaks out and offers solutions. This isn’t the Jonestown dumpsite however; it’s the Marbo Cave.

After PNC was tipped off, we located several dumpsites leading up to and at the parking lot of Marbo Cave in Mangilao. According to Mangilao Mayor Nito Blas, the site is cleaned every once and while but as is the case with so any other dumpsites, it continues to accumulate trash months later.

“Well, yeah every six months, I can remember, there’s some group that comes here and invites other non-profit groups, religious group and other concern, non-profit groups that come here and clean up once and a while here,” said Blas.

Blas tells PNC that different non-profit and governmental groups come together to help clean the site. But it’s not sustainable. He says the site should be made a national park. He also suggests that the private owner hire a guard to watch over the parking lot during the day. All in all, Blas says the responsibility lies with the private owner, much like the Jonestown dumpsite. With no visible trash cans in site, visitors are tempted that much more to throw their trash on the ground.

“I don’t know how we can do this on a daily basis unless somebody will send somebody here or convert this to a public park and let Parks and Rec or federal program to take an interest on this beautiful place here,” said Blas.

This makes it difficult to set up daily procedures that will keep the site clean.

Blas says anyone interested in helping to clean up the road along Marbo Cave can contact the Mangilao Mayors office.

Blas says,”[If] a regular person want [to help], just call me up and well do it, yea you know if we say we are going to pay them, they come every day.”