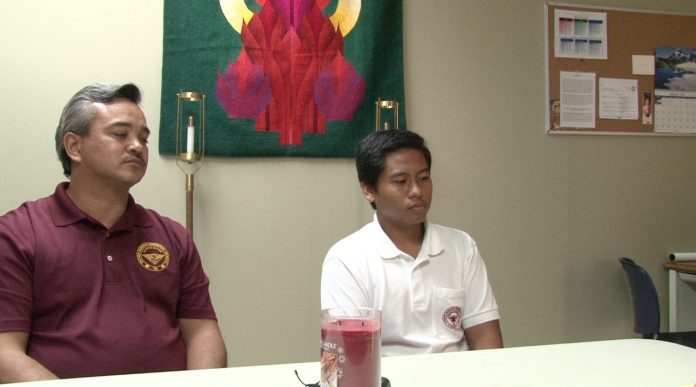 The MARC Seminar will start at 530 on January 28th at the UOG class lecture hall.

Guam – On Thursday, the first MARC seminar of 2016 will take place, and this series focuses on the research of one FD student and his teacher who spent a year traveling to the U.S. and back studying the life of Guam’s only soldier to fight in the invasion of Normandy or D-day.

17-year old Lazaro Quinata says he has developed a friendship with Francisco N.F. Blas. But how does a WW2 veteran and a 17-year old FD student develop a friendship? Through the magic of research.

“For about six months we did research him, we followed his journey, like his footsteps and where he was, where he’s been. The ships he’s served under, he really started to grow on me, he became a friend, an actual friend that I was learning so much about and in the back of my mind, I have to remember that he did die at Normandy,” said Quinata.

Quinata and his teacher Anthony Blas spent a year as one of 15 student teacher teams to research the one Chamorro man who fought at the invasion of Normandy for WW2. According to Blas, they were chosen to represent Guam for the National History Day Competition. The program, in which the main donor is Albert Small, allows 15 student teacher teams to “engage in rigorous study of D-day and world war 2. On January 28th, the pair will present their research in the form of a website for the University of Guam’s MARC Seminar. Through their research, Quinata and Blas were able to follow the footsteps and uncover a man who perished close to 72 years ago. According to the 17 year old FD student, along the way they found Francisco’s sister as well as other family members.

“Eventually he’s gonna share with you we found one living relative. One living relative that he did have that’s still alive today is his sister, Julia Sablan. She’s still alive today which is amazing how old she is. It’s really interesting because her great granddaughter Julie happened to marry one of my other teachers who goes to Father Duenas, Colin Perez,” said Quinata.

During the course of the project, Quinata and Blas were able to actually provide information to Fracisco N.F. Blas’ family members.

“He leaves here and we never see him again, so it must have been tough for him that the war is going on and his island is occupied for two and half years with the Japanese and he’s on the other side of the world and he cant do anything about so he had to be worried about his family. They have no idea what happened to him and to be able to give them the story of what happened to him there in his life was very powerful,” said Blas.

Quinata and Blas traveled to Maryland and stayed at the university while doing research as well as Normandy France where Quinata gave a eulogy to Francisco and then they laid a wreath by his grave, which they brought back and plan to give to Blas’s family. According to both researchers, this project gave them a reason to highlight the sacrifice’s military members make everyday.