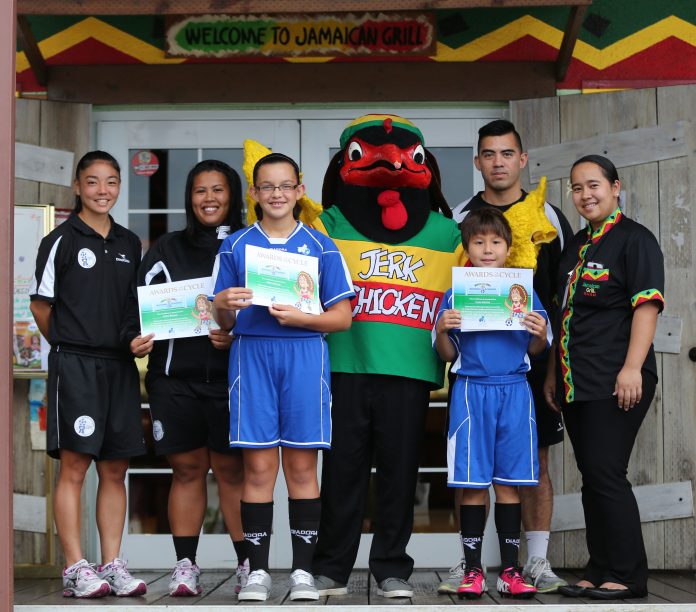 Harmon, Guam — Yuuto Marchal, Sabrina Kenney, and Ashley Besagar were recently recognized by Guam Football Association National Academy directors and staff as the Jamaican Grill National Academy Players and Coach of the Cycle, respectively, for the program’s third session of 2013.

“Yuuto Marchal has been one of our standout players since the beginning of our National Academy program last year,” said Dominic Gadia, National Academy Director for Boys. “He has great natural talent and is one of our rare left-footed players. He is a very clever player and wants to be like his idol, Cristiano Ronaldo.

“He spent last summer in Las Vegas and had the opportunity to participate in a football camp while he was there. He caught the attention of several coaches; this is a good reflection of our homegrown talent, as well as our National Academy Program,” Gadia added.

“Sabrina is one of those players with an insatiable appetite for knowledge,” said Samuel San Gil, National Academy U12 Girls coach and Guam U14 Girls national team coach. “Her humble nature is one of her best attributes as she continues to develop as an athlete. She is attentive during Academy training sessions and is very hardworking.

“Sabrina is a gifted and well-respected defender, and even at her young age, I selected her to represent Guam at the AFC U14 Girls Regional Championship in Beijing, China earlier this year,” San Gil added.

Kenney is a 12-year-old seventh grader at Harvest Christian Academy. Kenney trades in her National Academy jersey for her bright Orange Crushers FC jersey on Saturdays during the youth league

Besagar, who recently completed the AFC “B” Coaching Course, traveled to Nanjing, China as an assistant coach of the Guam U16 Girls national team, the Junior Masakåda, under Brett Maluwelmeng for the AFC U16 Women’s Championship. She also worked as an assistant coach to former U16 Women’s national team coach Kristin Thompson when the team made history in 2012 becoming the first national team from Guam to qualify on its own merit for an AFC tournament’s championship round. Earlier this year, Besagar also assisted San Gil with the Guam U14 Girls national team. As a player, Besagar most recently represented Guam in the East Asian Football Federation Women’s East Asian Cup preliminary competition in July 2012 at the LeoPalace Resort Guam.

For each of the winners’ efforts, Jamaican Grill awarded certificates of achievement as well as dining certificates at the restaurant’s Dededo location.