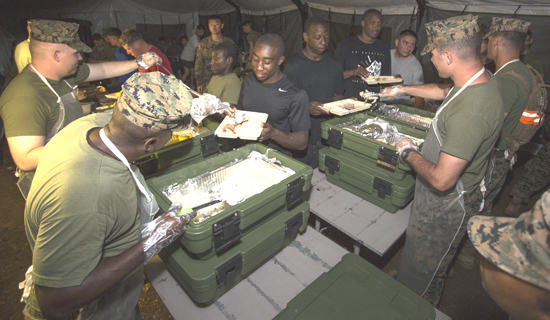 Guam – TINIAN, Northern Mariana Islands – There were no decorations, turkeys or the aroma of pumpkin pie to be found as the Marines on Tinian awoke Thanksgiving morning to work just like any other day.

That is until the USO provided more than 58 boxes of food to service members currently participating in Exercise Forager Fury II Nov. 28 at Tinian’s North Field to raise the morale of service members.

FF II is a joint exercise is designed to employ and assess combat power generation in a deployed and austere environment. Service member are with 1st Marine Aircraft Wing, III Marine Expeditionary Force.

Food service specialist Marines were on hand to serve the Thanksgiving meal to the service members.

“The morale of the Marines was unbelievable,” said Lance Cpl. Mark Edwards, a food service specialist with MWSS-171. “All of the Marines were smiling in line anxiously waiting for their food. It made me and the other cooks very excited to serve this particular meal. We consider ourselves privileged to be able to serve this food to the Marines because we know it means a lot to them.”

[Marines serve food for Thanksgiving Nov. 28 at Tinian’s North Field during exercise Forager Fury II. The United Services Organization provided more than 58 boxes of food to Tinian and Guam to help raise the morale of service members. The purpose of FFII is to employ and assess combat power generation and sustainment in a deployed, austere and unimproved environment. The Marines are with 1st Marine Aircraft Wing, III Marine Expeditionary Force. (U.S. Marine Photo by Lance Cpl. Antonio J. Rubio/Released)]

Food service specialists were not the only Marines serving dinner as members of the senior leadership also served their Marines traditional holiday feastings.

“I get to serve the best part of the meal, the pumpkin pie, which makes Thanksgiving, Thanksgiving,” said Chief Warrant Officer Steven Taynton, the embark officer in charge with MWSS-171. “Serving Marines a Thanksgiving meal is fantastic. You get to see everybody smile when they get in line and they’re like ‘everything is wonderful and delicious.’ The Marines have been working hard and serving them is a way to give back to them.”

Because Thanksgiving is such a family-oriented holiday, it’s very difficult, but with turkey and ham filling the bellies of the Marines, operations in Tinian will continue with efficiency seeing as the Marines’ morale is sky high, according to Cho.

“Being on an exercise, away from their families and homes is tough, but doing it during a holiday is even tougher,” said Cho. “We’re all in Tinian and this meal gives Marines a feeling of home. They’re with their sections, which to them is family, and it definitely raises morale.”