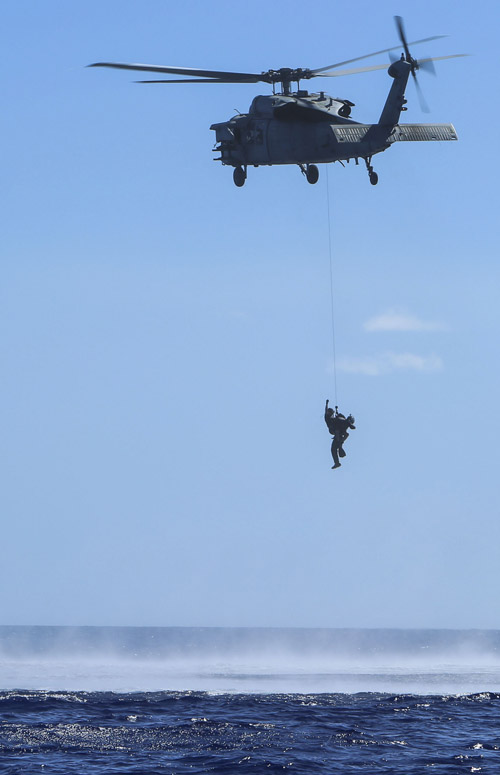 Guam – ANDERSEN AIR FORCE BASE, Guam – When a pilot or aircrew member ejects from their aircraft in the middle of the ocean, being rescued by a search and rescue team is their highest hope.

To prepare for this worst case scenario, Marines and sailors executed a combat search and rescue mission Dec. 11 with fixed wing and rotary wing assets off the coast of Guam during Exercise Forager Fury II.

“Anytime we’re in combat, we may have to go rescue someone out in enemy territory and in that situation there is no other option than to be successful, so this training is extremely important,” said Navy Lt. Miles Erwin, Aeromedical safety officer with Marine Aircraft Group 12, 1st Marine Aircraft Wing, III Marine Expeditionary Force.

Marines put a man in “enemy” waters, acting as a downed aircrew member who ejected from a tactical aircraft, simulating a rescue in a combat zone.

Training, like the search and rescue mission, is normally done in a pool so an opportunity to get the feel of what a real mission would involve was indispensable, said Capt. Chase Thompson, simulated downed aircrew member and logistics officer with MAG-12.

[An MH-60S Seahawks pulls the downed aircrew member and the rescue swimmer out of the water Dec. 11 during a Combat Search and Rescue exercise off the coast of Guam during Exercise Forager Fury II. The purpose of exercise FF II is to employ and assess combat power generation and operations in a deployed, austere and unimproved environment. The MH-60S Seahawk is with Helicopter Sea Combat Squadron 25 stationed at Andersen Air Force Base, Guam. (U.S. Marine Corps photo by Lance Cpl. Alissa P. Schuning)]

“To actually work the equipment and have the feeling of that life vest around your neck and the raft keeping you afloat out in the open water proved to present more challenges than when you are in the pool,” said Thompson. “The automatic floatation device inflated more than I expected, so it was difficult to get to some of my equipment, like my flare and radio.”

As Marine Corps’ fighter aircraft provided overhead external control in order to clear the Navy MH-60S Seahawk helicopter to rescue the aircrew member in an imposed area after Thompson relayed his location through the use of his flare and radio.

“It’s difficult to see anything in the water, especially when you’re up at 1,000 feet flying around, so it’s more effective for me to see them and tell them where I am and relay that location to the helicopter,” explained Thompson.

The rescue crew successfully extracted the aircrew member after dropping a rescue swimmer into the water and safely lifted him from the water, said Erwin.

“The CSAR went well and helped play into our entire scenario our here for FFII,” said Erwin. “We are acting as if we are at war and we have to perform the same way.”