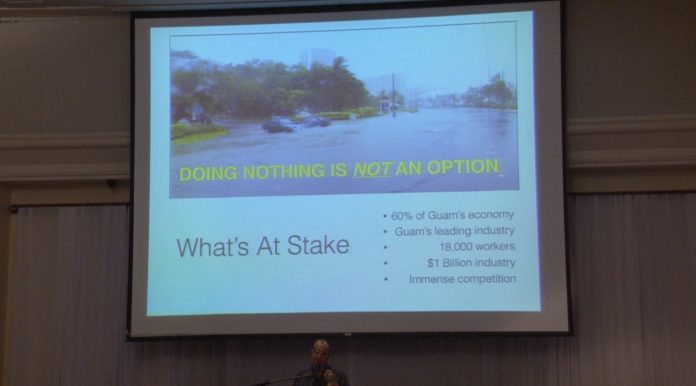 A familiar slogan throughout Baldyga’s speech was ‘doing nothing is not an option.’

Guam – Mark Baldyga, President of the Baldyga Group, recently spoke at a Rotary Club meeting where he acknowledged the strong opinions against GEDA plans to funnel all flood waters into one big ponding basin and then let the water run out into the Tumon Bay. Baldyga, however threw his support behind the plan after initially being against it.

Baldyga, at a speech for Rotary Club of Tumon Bay, says that he believes  the Guam Economic Development Board and their consultants came up with a solution on how to fix flooding in Tumon Bay that will ease concerns that funneling all flood waters into one big ponding basin is dangerous and unnatural.

“Part of the solution involves GVB funding, $250,000 a year for several consecutive years to do baseline bacteria and water quality analysis, not only now but during construction and then for the next three years after it opens and in addition they’re installing a $500,000 dollar add-on to this, which is a gate,” said Baldyga.

The investment in a GVB funded study for several years, including the gate, would likely cost millions. These investments, Baldyga says, will work towards finding out whether or not the plan to funnel water into Tumon Bay is harmful to the environment. However, according to Baldyga, in the event that the plan does prove harmful, things will go back to the way they were.

“Worst case scenario, what happens? Close the gate. We’re doing the studies doing the analysis, we close the gate, its going to backflow back to the low point, which is in front our building again,” said Baldyga.

During the traditional question and answer portion of the speech, one of the plans opponents, Dr. Ernie Matson, responded to an audience question on what the concerns with the plan currently are.

“It’s the culvert. It goes into Tumon Bay, that’s the biggest objection. When that thing overflows, it will fill up a third of tumon Bay and the flushing time for that part of Tumon Bay, which is dead center –hydrologic center of Tumon Bay, will take anywhere from 7-14 days for this big plum of brown muck to slush back and forth and back and forth and go out the two inlets. One at the Hilton and one in front of the Hyatt,” said Dr. Matson.

Dr. Matson will be speaking to the rotary club in early December.