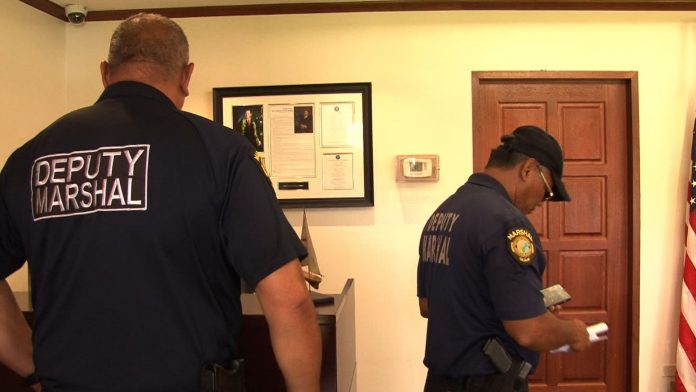 Guam – It appears action may be taken against Lt. Gov Ray Tenorio as marshals from the Superior Court of Guam visited the Lt. Gov Office this afternoon. Seeking a meeting with him. When PNC arrived, two marshals were seen entering an office adjacent to Tenorio’s door, with Special Assistant Dong Cho. They spent about 2 minutes behind closed doors and upon exiting, PNC asked for comment, but marshals said they would not be giving one. When asked by media, Cho would not disclose the reason for the visit, saying the marshals were only looking to meet with his boss. Cho says, the Lt. Governor has not stepped foot on Adelup grounds at all today, but noted that Tenorio was at an off-site meeting. PNC asked Cho to divulge the details of this “off-site meeting”, to which he replied “I don’t keep his schedule”. PNC has learned that the reason behind the visit, may be in relation to the infamous gun-grabbing incident that the Attorney General’s Office has said they are actively investigating.

This is a developing story, check back later for more updates.