Yangon, Myanmar- The chants of “Gu-am! Gu-am!” by local Myanmar football fans quickly intensified and loudly resonated at Thuwanna Stadium in Yangon, Myanmar as the Matao demolished Chinese Taipei 3-0, defeating its higher-ranked opponent for the first time in its history in an AFC Challenge Cup Group A qualifier match.

“This win is a really good indicator of the team’s steady improvement,” said Matao head coach Gary White. “From a few years ago losing by a large margin, down to 2-0 in last year’s Philippines Football Peace Cup and then a 1-1 draw in the EAFF East Asian Cup semifinals, to now beating Chinese Taipei with a convincing score – it’s notable progress. I’m very happy that the team ended the tournament on a very positive note. Last night’s game was more characteristic of the level the team can play. We just need to start tournaments better – but this comes from experience.”

The Matao stamped its authority early in the match when Jason Cunliffe’s header for goal off teammate Jonahan Romero’s free kick in the 15th minute put Chinese Taipei in desperation mode for the majority of the contest.

[The Matao’s Ian Mariano sprints toward the goal with the ball after avoiding Chinese Taipei central defender Lee Meng-Chian (on ground). Mariano scored on the play in an AFC Challenge Cup Group A qualifier match at Thuwanna Stadium in Yangon, Myanmar. Guam blanked Chinese Taipei 3-0.]

Ian Mariano, moved from his usual midfield position to play as a striker in this tournament, was rewarded with his second international goal in the 54th minute. Mariano took a long pass from 18-year-old fullback T.J. Atalig, avoided central defender Lee Meng-Chian, and drew out Chinese Taipei keeper Chiang Yung-Hsuan on the play. Mariano then slotted his shot into the goal to give the Matao a 2-0 advantage.

In the 78th minute, Travis Nicklaw was taken down on his way toward the goal and Cunliffe perfectly placed the ensuing free kick past Chiang in the goal to give Guam a commanding 3-0 lead.

In the 80th minute, goalkeeper Dallas Jaye entered the game as a substitute for starter Doug Herrick, who had managed to keep a clean sheet for Guam with key saves in both halves. Jaye, starting goalkeeper for the University of South Florida Bulls, was quickly tested with two Chinese Taipei corner kicks, and in the 87th minute, a penalty kick opportunity by Chinese Taipei. Jaye quickly reacted to Chan Che-Yuan’s penalty kick, diving to his right side and deflecting the shot, as his teammates and stadium spectators roared in excitement.

From there, the books were officially closed on Chinese Taipei, as the team could not manage to stand any ground against a majorly confident Guam team. 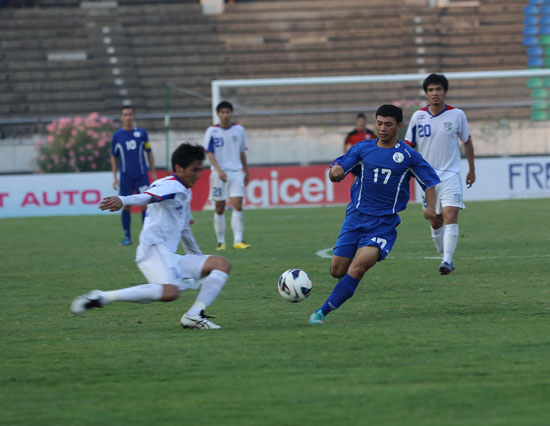 [The Matao’s Dylan Naputi looks to stay in possession of the ball facing an oncoming slide tackle by a Chinese Taipei defender in an AFC Challenge Cup Group A qualifier match at Thuwanna Stadium in Yangon, Myanmar. Guam blanked Chinese Taipei 3-0.]

“I was stoked of course to get that goal early on in the second half,” said Mariano, who also plays for Pachanga Diliman FC, a professional football team in the Philippines. “Personally, it felt like a huge weight taken off my shoulder, as there’s always pressure to score goals as a striker. It also gave our defense a little more breathing room and boosted the team’s confidence even more.

“To win 3-0 against a team we have never beaten before really shows the investment and improvement in our system, our style and our team – it really means a lot to me,” added Mariano, who has been representing Guam at the senior level since 2006.

In the day’s late game, Myanmar narrowly edged India 1-0 to finish in first place in the group and automatically qualify for the 2014 AFC Challenge Cup in the Maldives. Host country Myanmar needed the win to secure its berth following its 1-1 draw with Chinese Taipei on Monday. India, which finished in second place with its only loss of the tournament, will need to wait until the end of the month to find out if it is one of the top two second-place finishers that will earn a berth into the Challenge Cup.

The Guam-based Matao will return to the island Saturday.